Larches and the Last Leaves: Winter Is Ready to Settle in 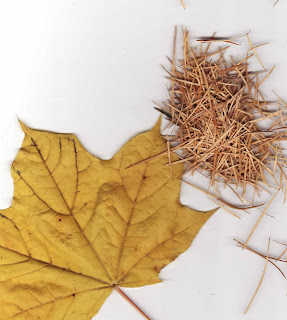 A couple of weeks ago Lionel Lévac, the agricultural specialist on Radio Canada in Quebec City, gave a long ramble about how larch trees always turn yellow the week before the first snow. Seems they had already in his bailiwick, and so he was forecasting a storm.

The trees' predictive ability was pretty good for Lévac's region, but not for elsewhere since it snowed a few days later all over the province although the larches around Montreal were still as green as any other conifer. It was only last weekend that the larches turned yellow here.

That early storm brought numerous power outages in rural and mountainous areas which lasted several days in some cases. The early snow caught many deciduous trees with the leaves still on branches, and the snow which clung to them was too heavy for the branches to bear so many broke, bringing down power lines too. The same amount of snow after all the leaves had fallen would have had little or no effect. That’s one of the interesting adaptations of trees in this climate: no leaves means less burden on branches.

Most conifers have different adaptations to deal with winter, among them branches which can bend downward, allowing snow to slide off more easily. Larches go the whole hog, though, and shed their needles too.

This morning I collected a handful of larch (also known as tamarack) needles when I was out walking. The ground was also littered with the last of the maple leaves. There’s snow in the forecast over higher ground, and tomorrow is the last day the borough will collect dead leaves for recycling in our neighborhood.

Time to get to work outside before the snow flies.
Posted by Mary Soderstrom