Saturday Photo: Getting Rid of It... 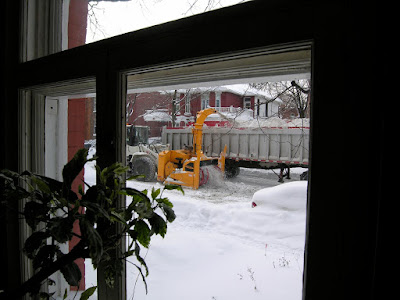 Lots of snow here this last week.  It's always a surprise, but March can bring lots of the white stuff.  Here's a photo taken a few years ago when they were cleaning in front of our house.

Most of the snow clearing gets done at night, now.  Cost cutting reasons, I suppose, which also may lie behind the massive mess on Tuesday night when hundreds of people were stuck on major autoroutes.

Subcontractors  were responsible for keeping the stretch of highway clear, but didn't have as the trucks and other equipment available they were supposed to have working.  The huge tie-up was aggravated by lack of coordination and refusal of people in authority to take the initiative to get things taken care of.

Sad, as 45 would say.
Posted by Mary Soderstrom