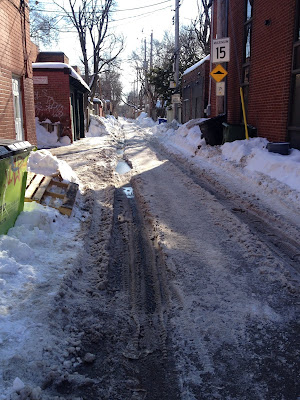 This is what our lane looked like this morning.  After several snowfalls and freeze and thaw cycles, it had been reduced to two tracks of ruts about four inches thick.

The arrondissement has said it will keep up snow removal in this lane which serves 300 families in a four block stretch.  Not only do many of them (including us) get oil deliveries off it, access to our parking is supposed to be by it.

Last Sunday night it took us a half hour to get into our garage which is about where you see the power lines crossing.  Later in the week a couple of neighbors got caught up on the ruts, trying to get out this way.

Bah humbug!  There is no reason for this kind of snow build up: we've never had it before, the equipment is supposed to be on standby, the plan is push aside the snow and then remove much of it.  But it sure hasn't worked this winter.  Now I understand why people go South!
Posted by Mary Soderstrom

In my borough, the administration doesn't clean any lanes, unless there is a public safety reason to do so. People who park behind have to clean lanes themselves. Ours has become a ruelle verte, and while parking behind is still allowed, it certainly isn't encouraged.

The fact remains that we really need some new approach to street, lane, and especially sidewalk cleaning, as I fear the kind of ice buildup we've seen this winter will probably become more common, and a serious public health issue, both due to the increase of injuries and the decrease in walking.