Interesting constellation of events: a consulting engineer reports that he personally offered illegal cash to city officials not only in Montreal but several other municipalities, and a huge water pipe breaks, flooding downtown Montreal.

The engineer's revelations are the latests in testimony before the Carbonneau commission on corruption in the construction industry in Quebec. The flood occurred on a construction site where 100 year old water pipes are being replaced.

The need to repair ageing infrastructure has been apparent for years here: the photo was taken a couple of years ago in our neighborhood where sewer pipes, installed when it was developed in the early 20th century, were being replaced. 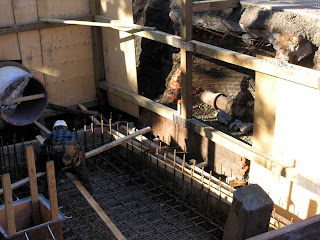 So far the Charbonneau commission's investigators haven't dug up anything about that part of the project, but they have about the contractor that was working on the replacement project downtown.

Democracy requires digilence, if only to keep people honest.
Posted by Mary Soderstrom