Good Books I Read in 2012: The Green House (with Comments about the Icelandic Model for Banks and Books) 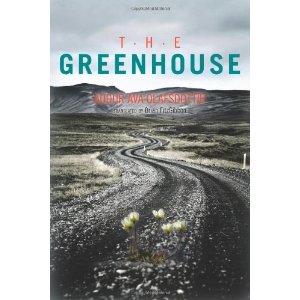 Everybody else has done their lists, but as usual I'm a little behind.  For the next few days, I think I'll share my faves of the year, starting with The Green House by Ava Audur Olafsdóttir (Rosa Candida in French translation.) The book and the country where it was written both are worth considering in these days of publishing gloom and doom and completely unnecessary "fiscal cliffs."

This novel of a young Icelandic slacker who leaves home to restore an historic rose garden in a monastery only to find love with the mother of his (accidental) child, is a delight on many levelsl.  It can be read as a simple coming of age story, where the difficulties of choosing ones path are vividly depicted.  But there also are marvelous cultural resonances--is it possible that the child is really a female Christ-figure? What about the forest which is anything but dark and evil, even though the people who live there seem to eat nothing but meat?  And what to make of the monk who offers wisdom at every turn, citing film references, not scripture?

Olafsdottir, an art historian, has written several other novels, but this one is the first to make a splash internationally.  It was a best seller in France for months, and has appeared elsewhere in Europe to big success.  But it wasn't picked up by a North American publisher until Amazon.com brought it out last year. As such, it can be hard to find conventional bookstores and hasn't made it to many libraries.  But it's definitely worth seeking out.

The Icelandic publishing scene is quite amazing too: lots and lots of books brought out each year, and literary talk is king of the airwaves, it seems.  But all writers need day jobs because, unless they break out of the small market like Olafsdottir, they don't make much money from writing.

Underpaid writers are one  of the eleven reasons for the success of Icelandic publishing, according to  Baldur Bjarnason writing in the British publication, The Bookseller.  But there are others:

1: Expert retail
2: No back catalogue
3: A population of book lovers
4: No paperbacks
5: Intellectualism isn't a dirty word
6: No competing with Amazon
7: Cheap and fast production and design
8: Massive government support
9: Pricing
10: Easier distribution and promotion

Take a look if you're interested in books.  Looking at the way the Icelanders got out of the 2008 financial crisis by letting their banks go broke and not listening to the IMF and the World Bank is also instructive....

And this just in: two former executives in Icelandic banks have just been sentenced to prison for fraud in the financial meltdown.
Posted by Mary Soderstrom