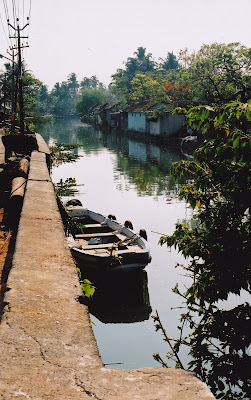 I have no idea if this canal still exists in Fort Kochi, Kerala State, on India's southwest coast, but I hope it does despite the recent catastrophic monsoon that flooded the area this summer.  But I like the photo because it combines two of the projects I've been working on.

The first is my book about the wonders, menace and history of concrete, Rock of Ages: How Concrete Built the World As We Know It.  The second is Frenemies:Why Some Places That Should Be Alike Aren't Alike.  Kerala  and Tamil Nadu, the state immediately to the east, are two of the pairs I consider in that book.

Until last week, the plan was to publish the concrete book in 2019, and the one about unidentical twins some time later.  But the world is moving fast, and now it looks like Frenemies will be out sometime next year.

So at the moment  I'm pedaling fast to make the necessary changes, since the manuscript actually was finished about a year ago.  The memories of my time in Kerala are just that, mental souvenirs of a very interesting trip....

And now to get back to work.