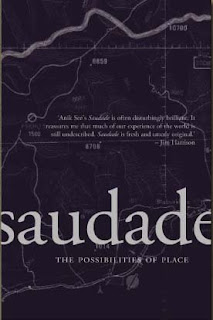 Anik See's book Saudade (Coach House Press) was also launched at the three events I was part of this week. She's a charming, tough young woman who has written a very interesting book which is part travel journal, part memoir. Over the last 15 years she's bicycled all over the world, and her observations and sensibility combine to make most interesting reading.

Now based in Amsterdam, she had some great stories to complement my own ideas about how cities should be organized. Amsterdam, she says, was not the city full of bicycles that it is today, but the result of conscious choices made a couple of decades ago. The city was being choked by cars, but instead of building more roads, the decision was made to favour the bike. The result--after years of bike-riding education for kids, adults and drivers--is a place where rush hour is quiet except for the whoosh of bikes passing with the occasional bike bell ringing.

Gives us hope for here, I think.
Posted by Mary Soderstrom