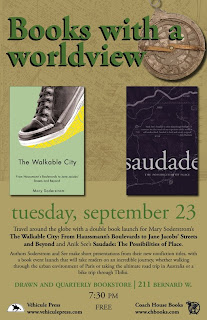 The first copies of my new book The Walkable City: Haussmann's Boulevards to Jane Jacobs' Streets and Beyond are supposed to be ready on Monday, and things are shaping up for a mini-tour the week of September 22.

Along with Annik See, whose travel memoir Saudade is being published this fall by Coach House Press, I'll be giving short presentations in three books stores. We'll also have time to answer questions about the books.

The first, Tuesday September 23, is my own walkable bailiwick. It'll begin at 7:30 p.m. at Drawn and Quarterly Bookstore, 251 Bernard Street West in the Mile End district of Montrea. (80 and 160 bus.)

The second, Wednesday September 24, is in downtown Ottawa, a stone's throw from Parliament (would be great if those guys read the book and took it to heart.) It'll be at 7 p.m. at Nicolas Hoare Books, 419 Sussex Drive. (Actually it's some distance from 24 Sussex, the Prime Minister's residence,however.)

The third will be in Toronto at 7 p.m. Thursday, September 25, at
TYPE Books, 883 Queen Street West, in the middle of another walkable neighborhood.

Would love to see you there!
Posted by Mary Soderstrom