Little Cat Feet or Temperature Inversion: Quiet in the Middle of the City 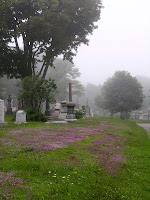 Lots of background noise this morning when I woke up—it’s an effect I’ve noticed frequently lately as temperature inversion layers settle over Montreal. Then when I walked into a cloud/fog as I climbed Mount Royal in the cemetery, I noticed how progressively quieter things became, until at the top the roar of traffic appeared very distant.

There are climatological reasons for this, it seems. To make a long story short, sound is deflected downwards by the inversion which acts sort of like a lid on the bustle of the city in the morning. Up the mountain, one is above the inversion and hence above, literally, the madding crowd.

The phenomenon can be explained in equations, but I prefer Carl Sandburg’s poem Fog, from his Chicago Poems.

It sits looking over harbor and city on silent haunches and then moves on.

Photo: Fog in the summer cemetery