Quebec to Cut Green House Gases by 20 Per Cent Compared to 1990, But the Problems Isn't Solved 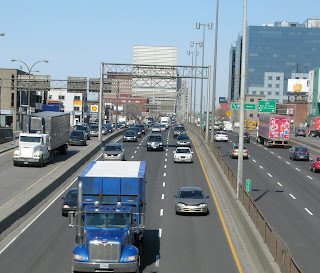 Montreal has a smog alert today as it has several times in the last two weeks, which is a little ironic, considering that yesterday Quebec Premier Jean Charest pledged to cut the emissions by 20 per cent compared to 1990 by 2020.

On a per capita basis, the province's emissions would drop to eight tonnes, considerably less than Quebec’s previous target of 11 tonnes per capita. In comparison, the European Union targets are nine tonnes per capita, while the Harper government aims to reduce them to something around 22 tonnes.

Charest said that the biggest effort will go to reducing emissions linked to transportation, currently making up 40 per cent of the total. Most of Quebec’s electricity is generated by hydroelectric plants, so coal-fired power is not an issue.

But still on days with temperature inversion layers we get smog. Local officials have begun to attack the winter problem, which is exacerbated by use of wood for heating. But the kind of hydrocarbon smog we have today would seem to be mostly transport-created. Certainly for the last few days it has smelled the way it did when I was a kid in Southern California when smog was an unrecognized problem.

We need to move quickly on providing better public transportation, and to expand programs to encourage walking and bike riding as ways to get around.