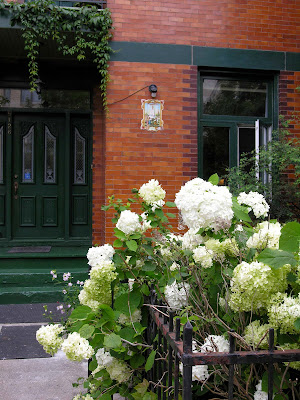 Today this photo, taken in June when the hydrangeas (hortênsias, in Portuguese) were in bloom, is a bit of celebration. As I've said. before I've been struggling to learn to speak and understand oral Portuguese. For the last several years I've been able to read it with some facility, but the oral language, particularly as spoken in the Mother Country itself, has been a mystery.

But thanks to a great class at the Université de Montréal taught by Luís Aguilar and Vitália Rodrigues I've made great progress this fall. It helps that the other students are motivated and great fun--four of us fogies over 55, a half dozen Hispanophones, several people who are itching to return to Brazil because they had such a great time on holiday there, and one young guy whose parents came from Angola at least 25 years ago.

Thursday Luís and Vitália showed us the website they've been developing about Portuguese language and culture, which includes links to Radio-Televisão Portugal. They showed us part of the previous night's news, and I found that I could understand almost all. What a change from last winter when I watched clips from RTP news regularly, but was completely lost.

Hence the photo. Hydrangeas grow as hedges on São Miguel which is where most of the 40,000 Montrealers of Portuguese descent have their roots. You find them planted in tiny front yeard gardens all over the center city neighborhood where the first wave of immigrants settled. You'll also find tiles--azulejos--decorating entrances just as you do in Portugal. This summer I set out to take a series of photos to document them--as the original owners age, they are selling their places to people who may or may not appeciate the tiles--and this is one of the nicest.
Posted by Mary Soderstrom