Saturday Photo: Bixi Getting Ready for the Winter 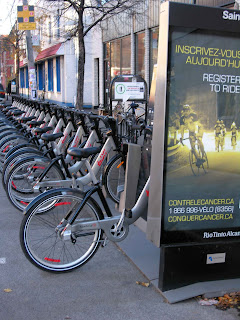 Montreal's bike rental program is winding down for the season, after providing more than 1 million trips around the city. Since the first of November, the numbers of Bixis available has been cut, and November 30, the system will shut down for the winter.

A great success, most observers say. Certainly people who might never have ridden a bike to run an errand have begun to do so. Even I, who hate to ride bikes, have begun to think that maybe next year I ought to try it.

Last week I ended up taking a taxi to the Université de Montréal--a trip I make on foot in 35 minutes--that got stuck in traffic. I ended up paying $15 and arrived in only 10 minutes less time than I would have, had I walked. But as I watched the bixis peddling past the taxi on the bicycle path, I realized that grabbing one of them would have been much faster and certainly cheaper: the sign up fee for a day is $5, with the first half hour of a trip free (subsequent first half hours are also free: the idea is not to provide bikes for long trips, but for short ones.)

Well, we'll see if I get up the courage next year.
Posted by Mary Soderstrom

In Paris, many, many practical urban bicycles have also been SOLD since the Vélib scheme began. I love my old Raleigh mixte (it is a six-speed, which is plenty for the climb up to UdM. I don't do the scary road up and down Mt-Royal (Camillien-Houde?) Just the Olmstead Road.

I love the Dutch and Danish one-speeds, but getting over our so-called mountain on them would be hard on the knees.

I really wish that they'd make Bixi bikes available to everyone in Montreal, and not just people with credit cards.

I heartily agree, Muziton, though how could we make sure the bicycles would be returned? In Point-St-Charles, where of course there are many "Sans-carte" (de crédit), there is a local free bicycle scheme, but many have disappeared.

Vélib, Bixi and co. have created a qualitative leap in the critical mass of cyclists in their respective cties. 25 years ago, who would have imagined that Paris would take on the allure of a larger an hillier Amsterdam? Oh, Paris is still far behind Copenhagen, Amsterdam, several German cities and even Strasbourg, but the revolution is astounding.

We'll have to work on how the system can become accessible to everyone, including people without credit cards, while protecting against theft of a common good. Looking at public libraries might be a starting point - most books don't cost as much as a bixi, but they do lend out some pretty expensive volumes.

Sorry for the double post, but I've been perusing Muzition's blog - on her musical performances and travels in Austria and Italy - and she has taken an utterly beautiful pic of the cycling and walking path surrounding the Tuscan town of Lucca, on the old fortifications. Love the nun!:

I'm glad you like my Lucca photo, lagatta. It was actually taken with a crummy disposable camera. I'm glad you find it beautiful :)