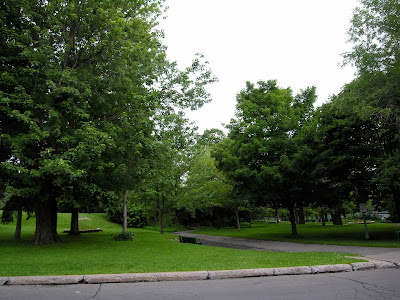 Alfred Joyce was a Montreal businessman who made his fortune in sweet things in the late 19th and early 20th century--he's listed as being a "confectioner" in most of the directories. At some point he acquired a nice piece of land in what is now Outremont and built a house which he surrounded by lovely gardens. 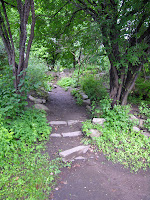 Today they're Parc Joyce, with tennis courts, a playground for small children, two of the oldest gingkos in Montreal and great places to sit and enjoy summer days. 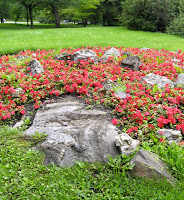 This year someone also had the bright idea of planting an outcropping of rock with impatiens--quite lovely.
Posted by Mary Soderstrom

Oh, that is lovely indeed. I didn't know there was anywhere to sit and enjoy fine weather.

I confess I discovered it trying to find a route home from Université de Montréal, late in the evening. Yes, I was a (very sage) delinquent who rode her bicycle down to the source of Bernard. There were no joggers or strollers at that hour. Now I just walk there.

Hmm, would a picnic there be possible? I've picnicked at the lovely park behind Bernard, between 5 Saisons and the large, stately block where there is a health food shop.

this has been a wonderful tour-thanks for sharing!

I'm sure there would be no problem in having a picnic in the park. I've never seen anyone doing so, but that in part may be because I tend to cross it early in the morning, and breakfast picncs are not as popular as lunch or supper ones.

And, Ann, glad you liked the park. I'll post more about Alfred Joyce and his house later.

What a lovely garden! Nice to have some picnic in there.