Intimate Concert Shows off Elin's New Viol, and Kim and Boaz and Their Gorgeous Flutes 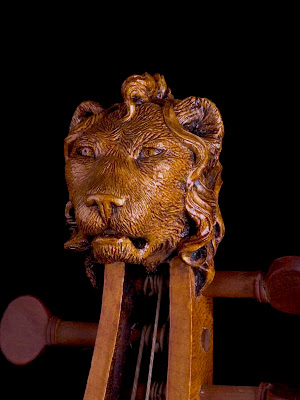 Last night was a first for Elin’s new viola da gamba: an intimate concert in a series organized by one of her students, Vincent Bonhomme. He is a coiffeur (far too classy to be a hair-dresser) whose small salon Jardin d’Art et de coiffure on Mont Royal Boulevard in Montreal’s Plateau district converts into a performance space where he has been organizing musical events for some time.

It was an evening of Renaissance and Baroque music by Ruffo, Ortiz, Hume, Abel and J.S Bach for flutes and gamba played on instruments that are—mostly—reproductions of the real deal. Elin’s Lion—the viol she fetched in Holland last month—sounded great, and as always it was a pleasure to hear her play that repertoire. She also played on her Italian viol and Precieuse Amandine, the 7-string French-style viol that has been her companion since she forsook the violin for the viola da gamba.

Kim Reine and Boaz Berney, newly installed in Montreal, played a half dozen flutes which Boaz made. Elin and Kim have been friends since they were undergraduates in music at McGill, and studied at the Royal Conservatory in The Hague at the same time, where Boaz also studied. An Israeli, he had met Kim (who’s from Edmonton) at a workshop in Portugal, and their relationship has flowered over ten years. They’ve spent the last several years in Israel, but now have moved to Canada and, particularly, Montreal, permanently. If you want a treat, check out their blog from the trip they took last year about this time to southern India. You’ll also get a visit to their apartment which once was a pizzeria and now also serves as a workshop where Boaz makes magnificent period flutes.

I think it's interesting how many hair salon hyphenate businesses there are. At least two hair salon-computer shops I've seen, which is an odd combination. Plus art galleries, and the space you mention.

The bike shop on Amherst below Ontario also offers "Lesbian Haircuts" and has a proper chair.

Like the idea of a hair/computer salon. But when you think about it, a lot of people become hairdressers because they're creative and need a day job to finance they're more traditional artistic endeavors.

My niece who did fine arts, with an emphasis on painting, decided to go to chef school when she was 20. When her mother looked a little skeptical she explained: "It's art, only just a different medium."