Saturday Photo: A Hot Time in the Old Time Today 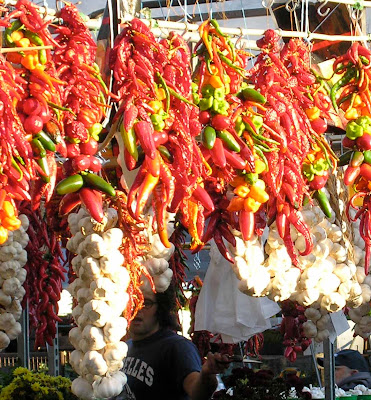 This is the season of abundance. Despite a wet beginning, the summer is ending with bushels and bushels of tomatoes in the public markets as well as strings of garlic and hot peppers like these for sale at the Jean Talon Market.

The first fall we were in Montreal I discovered the market as I went exploring. I'd take the Metro to a stop and get out and walk around: it's a great strategy for learning about a city, and it's one I've used to great advantage over the years as I've travelled to research my books. The afternoon I saw the apples and tomatoes at the Jean Talon market, however, was the first time that I'd seen such a gorgeous profusion. I turned around and went back home to get the car so I could buy the fruit and vegetables too heavy to carry home with me.

Le Devoir has a story this morning about the availability of local fruits in Quebec supermarkets, asking the question: how much of the $1.6 billion of fruits and vegetables sold in the province were grown here? Hard to say, is the answer. Certainly Quebec raspberries were available in the public markets during the short season, but ones from California were about all one could find in the supermarkets. That's partly due to the longer shelf life of the California varieties: 7 days compared to 48 hours for Quebec ones.

Of course, there's no comparing the taste, and that is why during the summer I shop at Jean Talon or at the greengrocers in the neighborhood who buy their produce from
local sources.

Wild blueberries from the Lac St-Jean region and peaches for Ontario for dessert tonight! That should go well with spicy garlic chicken, don't you think?
Posted by Mary Soderstrom

Hi Mary, I agree – nothing better than a trip to the local market in the fall - and great pic – can any gardener really resist the beautiful array of peppers at this time of year, such an impressive selection of varieties and colour. Enjoy your dinner.

We did! I love eating at this time of year--well, I must admit I like eating ANY time of the year!

My tomatoes really sucked this year. Big bushy plants, but the cherry tomatoes are smaller than pennies. My others are still green, and some big ones have nasty black spots.

My local dep, which likes selling some fresh veg at low prices apologised for the potatoes being a dollar more, but said the price would go up, because the harvest was bad.