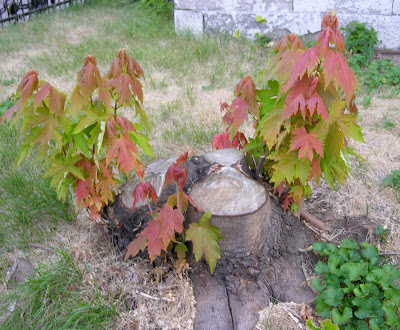 For reasons that aren't clear to me, the owners of an apartment building near us recently chopped down all the plantings around it.  Not that it was elaborately landscaped, but there were a few large rose bushes and a maple which probably cast some pleasant shadows on the lower, western apartments.  The place looks scalped and thre seems to be no move to replace what was there with anything at all.

But nature is strange and what Dylan Thomas called "the force that through the green fuse drives the flower" is strong.  Within days, these leaves sprouted from the stump of the maple.  Resistance, in the best sense of the term!
Posted by Mary Soderstrom