Signing Off for a While!

Lee's holding down the fort, the freezer is full of suppers, tomorrow I'll water the plants, and then I'm off.

I'll be back in about two weeks with pictures of my great South American adventure.
Posted by Mary Soderstrom 1 comment:

Count Down to Take Off:

Because I'm heading South on Friday, here's a little preview:

So tonight it's out to Pointe Claire on Montreal's West Island to celebrate Desire Lines: Stories of Love and Geography.  Should be fun!
Posted by Mary Soderstrom No comments:

The Lesson for Today: Give Peace a Chance

Yes, I know that we are not to forget the Great War and the other ones because we don't want to repeat earlier mistakes.  That at least is the official line. But when the jets flew low over Montreal at 11 a.m. this morning this is what I thought of:

Saturday Photo: At the Launch.. 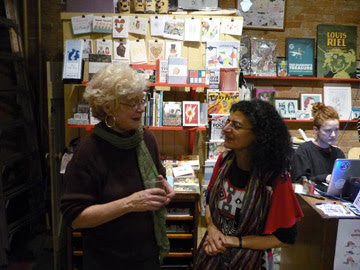 My friend Jack Ruttan took this at the launch of Desire Lines: Stories of Love and Geography last Wednesday.  It was a good party!

We'll have another good time on Tuesday at Librairie Clio in Pointe Claire, too, I suspect. Here's the link to the details.

And while you're at it, here are the links to two good reviews/interviews.

The Montreal Review of Books
"Soderstrom offers sensitive, attentive, and compelling portraits of relationships...It is precisely this “press of emotion” that is so beautifully expressed in these stories. The emotional tension makes the release of narrative conflict brought about by skilfully written endings all the more satisfying."

And The Gazette: "Love in all its forms"
Posted by Mary Soderstrom No comments:

Another Index of Climate Change: No Snow by Nov. 8 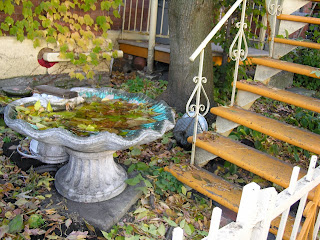 In the 45 years I've lived in Montreal, there has always been snow before Nov. 8 and the leaves have been swept from the trees.

Not so this year, which leads me to believe that all those Climate Change deniers have got it all wrong. (As if I didn't already think that!)
Posted by Mary Soderstrom 3 comments: 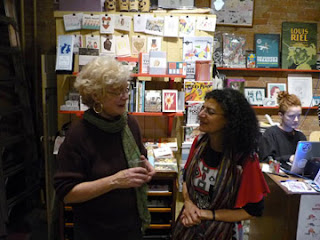 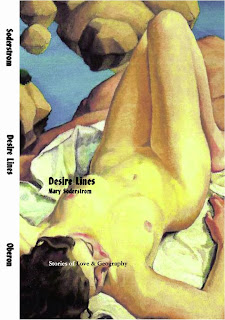 Sold out!  Every single copy of Desire Lines went out the door last night  at the Montreal launch in Librairie Drawn and Quaterly.  Thanks to all the friends who came to hear me talk about the book, and who (I hope) had a good time.

More good news: the bookstore received another shipment of books this morning (a box had gone to Edmonton) so come on by 211 Bernard West to pick a copy up at the same 10 per cent discount they were offering last night.

Thanks to Jack Ruttan who took the picutre of me with Dina Sakali, and to Edwin Holgate who painted the nude 90 years ago or so.

Be there or be square!  Drawn and Quarterly Bookstore, 7 p.m. 211 Bernard West, Montreal 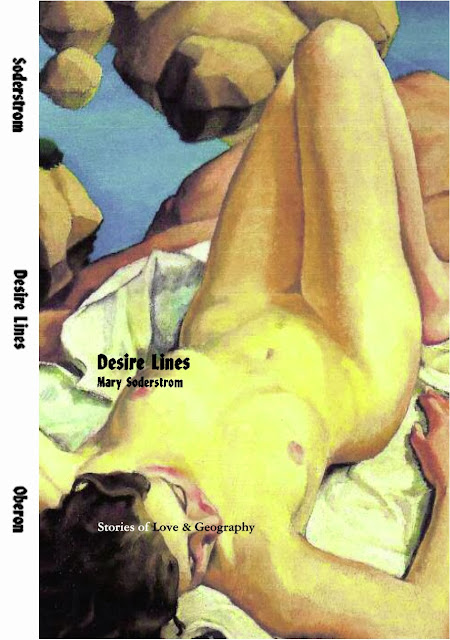 The World of BD, or How Cartoons Go Serious 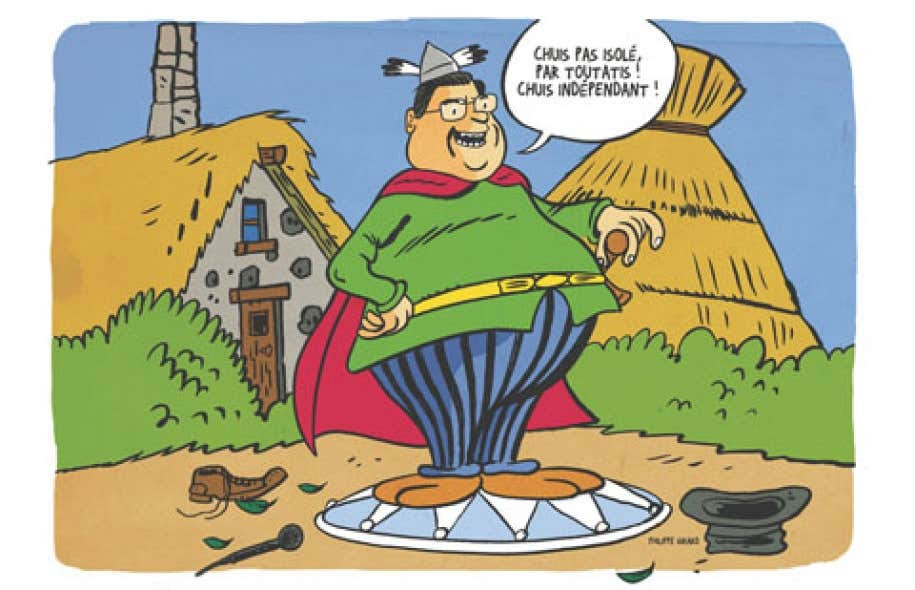 This morning Le Devoir has turned over the  entire paper to cartoonists.  The occasion is the opening of a new show of graphic illustration at the Musée des Beaux arts de Montréal, but it also is a sly way of commenting on the recent municipal election.

Instead of the usual photos accompanying news stories, the newspaper has asked the cream of Quebec's bédéistes (from bandes dessinées, the French term for cartoonists) to illustrate the news.  Some of them are right on, indeed.  And some of them are suitably méchant like the one above which shows mayor-elect Denis Coderre as the somewhat buffonish Asterix from the famous series of "comic books."

In the French-speaking world, illustrated books have long been considered seriously.  I remember being aghast when an artist friend suggested a book group I belong to read BDs for one of our monthly meetings.  But she presented a  number of beautifully drawn and produced books with story lines no more silly than many literary novels, and explained how the art work was of very high quality.

Since then I've taken "graphic novels," as they're called in the English-speaking world, far more seriously.  It's clear that the books frequently treat themes of substance, and are far from being the refuge of the semi-literate.  (Drawn and Quarterly, in whose bookstore I'll have my book launch Wednesday night, is a very successuly publisher of this kind of book.)  But the genre also always for much very  interesting comment on the state of the world.  Check out Le Devoir for sure today.
Posted by Mary Soderstrom No comments:

Stories of Love and Geography: One about Linnaeus 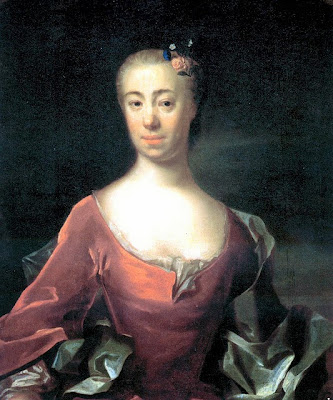 Another one of the photos behind Desire Lines: Stories of Love and Desire.   This is Sara Elisabeth Morea at the time that she married Carl Linnaeus.

Not such a pretty face, but today's standards, but apparently she was attractive for Linnaeus to pine over her when he was away for two years in Leiden at the Hortus Botanicus, working on his system for classifying the world.

Their romance lies behind the story "On the Prelude to the Wedding of the Plants."
Posted by Mary Soderstrom No comments:

Saturday Photo: What's Behind a Story 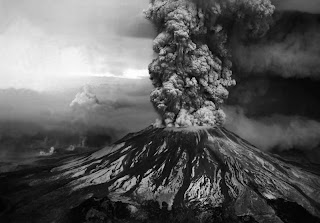 Ordinarily I use only pictures that I've taken for this feature, but today I'm pirating (well not really, they're bot WikiCommons pix) two photos taken by other people as the launch of my new collection of short stories Desire Lines: Stories of Love and Geography approached. 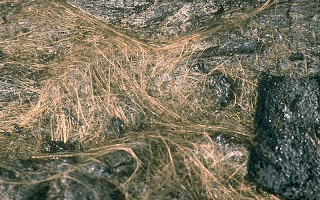 The longest story is one about the friendship of two women, set against some  massive geological events.  These include the eruption of Mount St. Helens, and volcanic activity in Hawaii that creates the sort of spun glass-like rock called Pele's Hair.

What to find out what the connection is?  Come to the book launch at 7 p.m. Wednesday, Nov. 6 at Drawn and Quarterly Bookstore, 211 Bernard West, Montreal. or 7 p.m., Tuesday, Nov. 12, at Librairie Clio in Pointe Claire Centre. 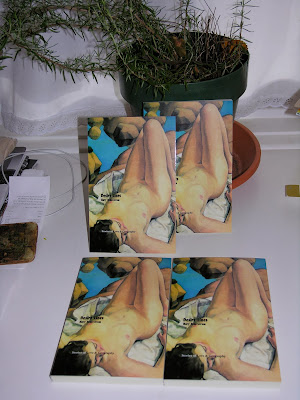 And there is singing and dancing chez les Soderstrom!

Lee, who hadn't seen the cover, says, somewhat hopefully, that maybe it will be considered pornographic and will sell well.

I reply that since the image is from a painting by Group of Seven artist Edwin Holgate, it's high culture, not sleaze.  But I'd like it to sell well too!
Posted by Mary Soderstrom No comments: