Saturday Photo: Christmas in the Cemetery, and Health Care

We went for a walk with the gang yesterday, doing the right thing for this Covid-19 Christmas.  No hugs, no inside gatherings, but at least we were together for a little while.

Didn't get to Mount Royal cemetery as planned, though, for complicated reasons that don't belong in this blog, but I had hoped to show the kids and grandkids these markers that I just noticed for the first times last week. They are for Billy Christmas and his wife.  He was an athlete at the turn of the 20th Century, and his beloved wife (apparently she convinced him to give up contact sports when they married) died early of breast cancer.  They also lost a daughter to a brain tumour when she was 15. According to the citation proclaiming him a member of the Canadian Sports Hall of Fame, in the 1930s he was an early champion of hospitalization insurance for ordinary folk.

I only discovered that latter fact today when I stated looking into who he was.  Nice to give him credit for that fight, as well as his prowess on the playing field.  We didn't get universal hospitalization insurance all over Canada for another 30 years, but it finally came.  Now why can't our friends to the South get their act together do something similar.

Saturday Photo: Lights for This Year... 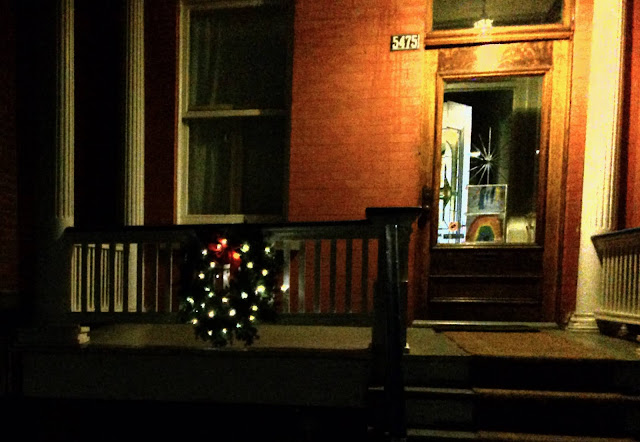 There have been years when I've railed against people who put up Christmas lights--waste of electricity, bad taste, just generally not cool.  Besides it's hard to hook them up to a plug inside: the one time Lee and the kids brought some home we decided they were too much trouble to bother with.

But this year I decided we needed a little light, so I found some battery-powered ones and wrapped them around a wreath.  They look very cheerful, and seem just what the doctors ordered in this Plague Year.  They complement the paintings on the front door, too, which are rainbows that the grandkids did back at the start of this dismal  period when kids around here appropriated rainbows as a symbol of the hope that everything will be all right.

So far for us, things really have been all right, touch wood.  Do hope you and yours are also doing well.  If you'd like more details about what we've been up to, check out our end of year blog here.

Saturday Photo: What I Can't Find This Year... 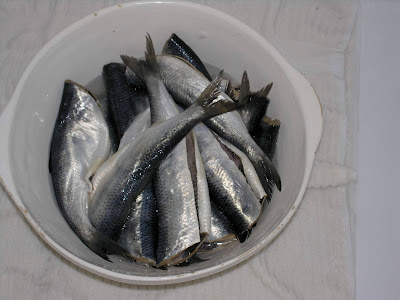 This is going to be a Christmas not like any other I've experienced, but we're healthy and we have more than enough to eat, so I shouldn't complain.

But I will, anyway.  The photo is of the salt herring I bought just 10 years ago when we were camped out in a rental apartment after a fire that put us out of our house for 8 months.  (Didn't lose much, weren't hurt, shouldn't really complain about that either.)  What I was preparing to do when I shot the photo was filet the fish and put them to pickle in order to make Swedish sil according to my mother-in-law's recipe.  It was a holiday tradition, and by last year even two of the three grandkids had come around to liking it.

In recent years I've had trouble finding salt herring in Montreal: for the last two years I bought a pail from a local wholesaler who this year has been been having issues with sanitary practices, so I haven't even tried to buy from them.  Two weeks ago we checked out various kinds of commercial pickled herring--including a Swedish import--but even after spending a week in the pickling solution, the taste and the texture of the fish were clearly not up to standard.

So what I think I'll do is just pickle onions in the pickling solution and pretend that everything is just what it should be.

And that, on reflection, is what I guess we all will do this year.

Saturday Photo:No Snow, Temperature Up and Down, Bushes Confused 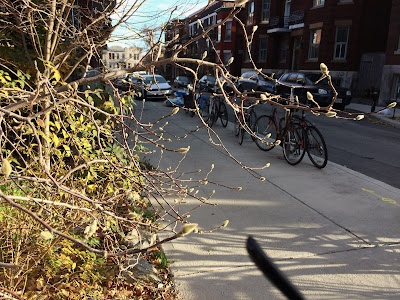 Took this a few days ago after a short spell of warm weather--up as high as 15 C.  This is not to say we've been spared cold weather so far because there's been two snow falls and a month of September that was quite chilly.

There is no doubt that winter is coming or is here, yet this bush seems to think that the cold nights are really just bad dreams, and so is getting ready to leaf out.  Its hopes (if it's proper to speak of plants having hopes) are certain to be dashed soon.

Our hopes for small gatherings at the end of December--promised by the premier of the province if we were good--were dashed this week as hospitalizations, deaths and Covid 19 cases continue to rise. Looks like it will be a Zoom Christmas...