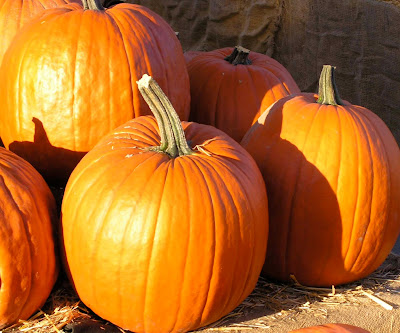 Just returned from scouting pumpkins.  Thomas and Louis (5 and 17 months) are coming over today and we're going to make a pumpkin, or maybe two.

We currently have two tiny ones and two small ones, chosen by Jeanne when she was here earlier in the week.  She left with three small ones for herself and her parents.  She also chose the ones we have: I was surprised that she wanted the smaller ones, but she was the one who got to decide. 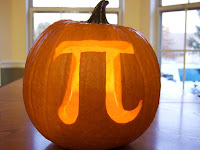 Not sure what Thom will think though, hence the scouting trip.  Funnily, there seem to be very few medium sized ones around--a few tiny ones and several enormous ones in the stores.

Well, we'll see what the boys decide.  And afterwards we'll have the prospect of several pumpkin pies, which are favourites around here. As is this terrific jack o'lantern carved a few years ago by some talented folk. 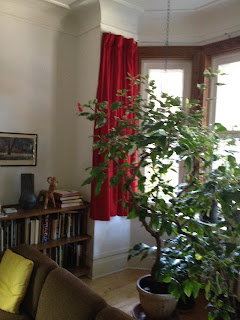 The plants were brought in, there was a little frost Tuesday morning, but the temperatures shot up considerably at the end of the week.  Because of this--or despite it, take you pick--one of the hibiscus celebrated by sending forth another flower.

Should be interesting to see if the plant continues to be so colourful.  At the moment, we're just enjoying have the green inside, as the trees finally begin to turn colour.

Climate change is really weird.  We haven't had to turn the furnace on yet this fall, and didn't run the air conditioner very much either this summer.  Maybe this Montreal is becoming a more temperate climate?

For years I've had two hibiscus bushes that have bloomed perhaps a half dozen times when the conditions were just right.  I put them outside in the summer, but even then blooms are rare. This year, however, things are different.  They've spent four months in their usual vacation place, in our shady little patch of front garden, and in the past few weeks they've been blooming.  At the moment, they have three flowers (I couldn't get them all in the photo) with a few more buds still to go.

Two things may account for this.  First, I did put some composted manure on them in early August, because their roots had begun to show, but I've done that before with no real results.


The second factor is more important I think: for the first time ever I've kept them outside well in October, and the light coming through the overhanging tree branches is lower and  more intense.
Is this one of the upsides of global warming?  Will we have other falls where the temperatures match or exceed those of July and August?  No idea, of course, although the prospect of climate change gives me chills.  What I will do is bring the plants in next week, before the frost which is forecast for Monday night.  In the meantime I'll enjoy the blossosm.

Coming Soon to the Atwater Library: Road through Time 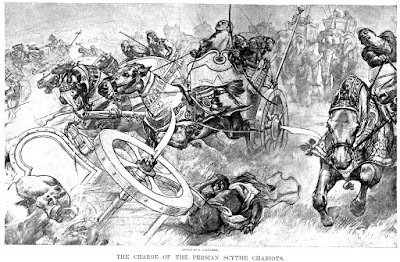 Hope to see you at 12:30 p.m. Thursday October 12 at the Atwater Library when I'll be talking about  Road through Time: The Story of Humanity on the Move (University of Regina Press.) This image of Persian charioteers (as imagined in the 19th century) will be one of those I'll show as I talk about the first roads, warrior's roads, modern roads, and where they may be leading us now.

A little fall in the air, finally, with some leaves turning colour!  Nice...

This weekend in Canadian Thanksgiving, a feast I like a lot.  The idea of giving thanks to some Supreme Being doesn't appeal to me, but I think it's good to occasionally stop and reflect on what one has.  We're lucky to live in peace in a country that is more good than otherwise, to have family and friends, and to be able to eat our fill.  Personally, I have been very lucky to be able to follow my star with the help of some wonderful people.  Thank you!

And tomorrow we'll all have a lovely meal chez Lukas and Sophie.  It's the first time they've hosted the feast.  It's great that they stepped up to plate when I hesitated because of uncertainty about a small health problem (which has more or less resolved itself, thank goodness again.) Merci and bisous à tous et toutes....
Posted by Mary Soderstrom No comments: