So, I'm actually posting on Friday, not Saturday.  That's because it seems like the weekend already.  Jeanne's school was finished yesterday, so she and Elin spent the night, after a picnic with Louis and company.  It wsa Louis's first birthday, and Thomas's soccer team, the Barracudas, also had a game.  A very pleasant evening!

Tomorrow is Quebec's Fête nationale, formerly known as St-Jean Baptiste Day.  When I finish posting this, I'm going to put up our Quebec flag, which, of course, featured the fleur de lys, the blue iris.  I do this not because I'm a Quebec nationalist, but because this is where we have chosen to live, and I want to signal that we (and other immigrants) should be included in all fête nationale celebrations.
Posted by Mary Soderstrom No comments:

Saturday Photo: Another Invasive, and One Not So 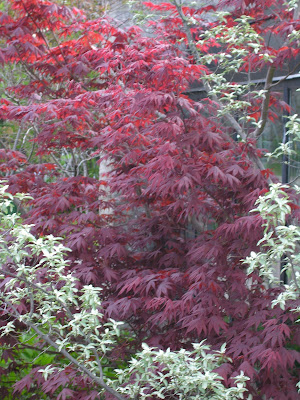 The perfume of Russian olives fills the air these mornings.  A bit like the scent of orange blossoms, it lingers all day.  I love the trees hardiness, as well as the smell.

But not everybody does.  Russian olives were introduced as wind break plantings early in the 20th century, and found conditions right to spread widely.  British Columbia is only one jurisdiction that considers it an invasive nuisance.  But around here, it's reached the limit of its natural comfort zone, and so grows in a well-behaved manner.

The Japanese maple, which is also beautiful right now, is much harder to grow.  I've tried, and in the end decided that I'd thrown away the $75 or so I spent on the small tree, because it simply did not appear when the snow melted the next winter.

But this gardener on The Plateau has succeeded in putting the two trees together wonderfully.

Saturday Photo: The Beauty of Invasive 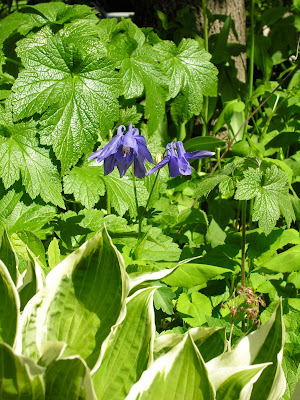 Maybe 20 years ago I bought a couple of columbine plants at a time when I wanted to switch to annuals in our small garden.  They have thrived, and are now in bloom  in front and in back of our house...and also in several other yards along our street.

I've done a little selective transplanting, but never onto to neighbor's property, so it would appear that at the force that through the green fuse drives the flower (to quote Dylan Thomas) has spread these lovely, complicated flowers.

Does this make them "invasive?"  Perhaps.  If so, what a lovely kind of invasive plant.
Posted by Mary Soderstrom No comments:

Saturday Photo: Making up for Lost Time with Two Photos from the Gaspé 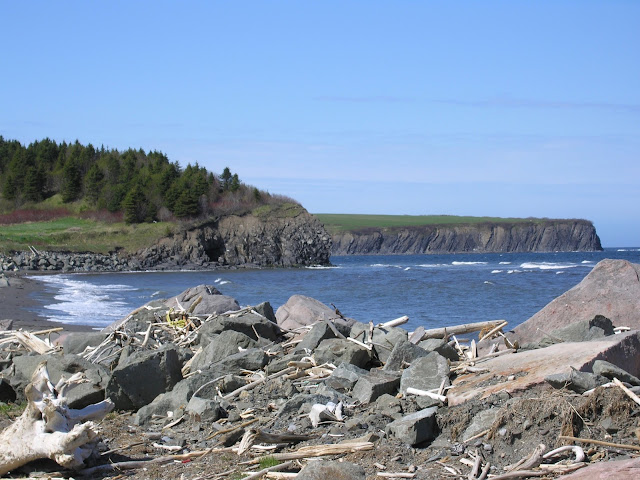 Just spent a great week on the Gaspé peninsula with Lee.  It was part work, but mostly play and we had a wonderful time.  The weather was cool and windy, but sunny--apparently a rarety this spring. 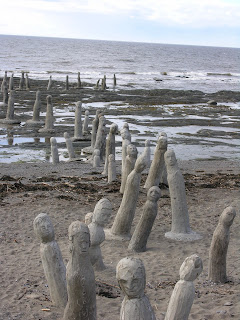 So here are two photos from the trip.  One is of L'anse au griffon, and the other of the weirdly amazing concrete figures that Marcel Gagnon has created, coming out of the St. Lawrence at Ste-Flavie.