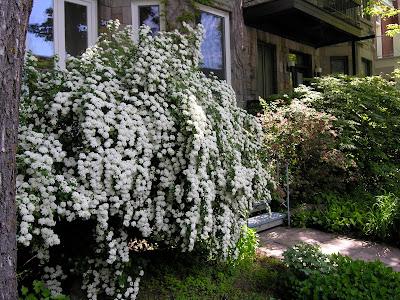 It's called bridal veil, I think, and this week its flowers are cascading gracefully everywhere around here.

Several of the trees on the street were cut down early this spring as a measure to slow the progress of emerald ash borer.  The jury is out over how effective that is, but one thing is certain: the plants which just got on underneath the trees no better than they should have grown immensely.

So this is a good year for bridal veil and honeysuckle.  What that means for weddings and etc. I don't know.  Any ideas?
Posted by Mary Soderstrom No comments:

Saturday Photo: Holiday, Just When We Need It 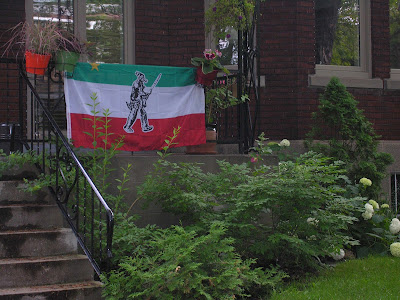 I've run this photo before. It's of the flag used by the Patriotes in 1837, when Canada had the nearest thing to a revolution that it ever had.

This weekend we're celebrating the Patriotes, while the rest of the country is celebrating Victoria Day.  Interestingly, she took the throne in 1837, although her attitude toward the rebels demanding a say in how they were governed was not at all positive.

I'd much rather celebrate wanting a vote that counted than a girl who stayed on the throne for decades.  But when the weather is warm, as it is right now, I suppose any excuse to enjoy the outdoors is all right.
Posted by Mary Soderstrom 1 comment:

Satuday Photo: After the Spring Rain 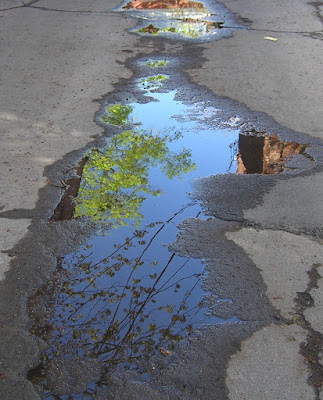 The roads aren't in great shape--the legacy of bad planning (probably) and a winter with a roller coaster of temperatures that turned the freeze and thaw cycle to new heights.

But Saturday morning after a heavy rain, the potholes in the lane were little lakes reflecting the progress of spring.  A few trees are nearly completely leafed out, but many are still in the early stages.  A long way to go before the growing season is really upon us, but there are many promises to be seen.
Posted by Mary Soderstrom 1 comment: 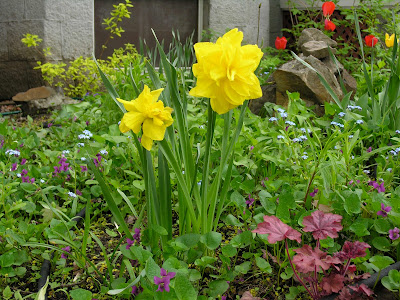 First nice weekend this spring.  Really lovely.  Going to do a barbecue for Mother's Day (Lukas will be doing the actual barbecuing, of course.)