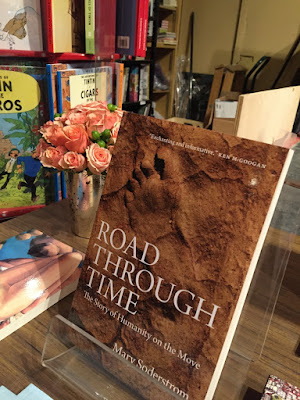 This is what the book looked like at the launch a week ago.  Since then I've talked about writing it at the Blue Metropolis International Literary Festival and am now getting ready to go to Librairie Clio for Authors for Indies day.

And for those who'd like to read the book, here's the link to the Goodreads Giveaway.  Only a little more than a week to enter to get a free copy!
Posted by Mary Soderstrom No comments:

Saturday Photo: Standing Room Only at the Launch Party for Road through Time 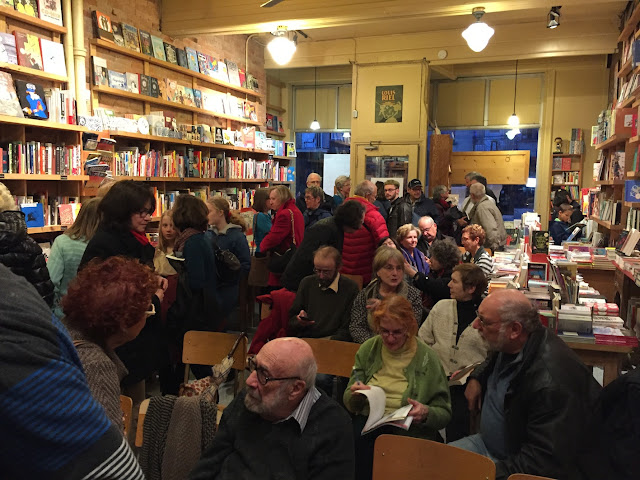 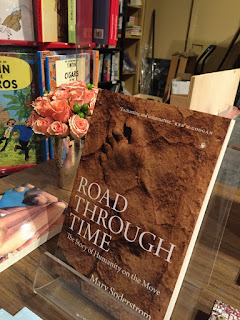 And a good time was had by all!  Librairie Drawn and Quarterly was packed Thursday night when we celebrated the launch of my latest book, Road through Time: The Story of Humanity on the Move.

It was such a pleasure to see old friends and new friends, including people I hadn't met before, in fact.  The flowers were from Ted Phillips, a true gentleman, and the photos were done by minha amiga brasileira Alice Mascerhenas.

Just a reminder to my friends who haven't already heard: we're having the launch party for Road through Time: The Story of Humanity on the Move tonight from 7-9 p.m. at Librairie Drawn and Quarterly, 211 Bernard West, in the Mile End district of Montreal.  Come and help us celebrate.

And this just in, a great review in Library Journal that ends: s:  "VERDICT This accessible work about an integral aspect of human life is a must-read for all interested in society, past and present."
Posted by Mary Soderstrom No comments:

Saturday Photo: First Walk in the Cemetery in a Long While 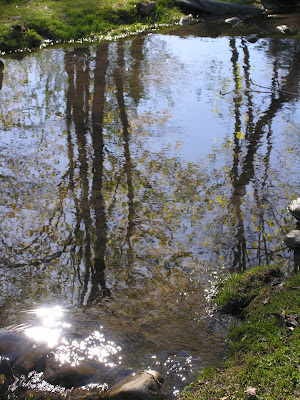 Beautiful day today. Almost certain that it will eventually be spring!

This morning I took a walk in the Mount Royal Cemetery for the first time since the fall--in the winter you never know where the ice will be so I tend to avoid walking there.  But today there is even a little green grass and lots of water in the stream that runs down from the top of the mountain.

Thomas asked Lukas what we are celebrating this weekend, and he replied after a moment's reflection: "Spring."  A good enough explanation for us cultural Christians, I think.

Saturday Photo: The Port of Montreal, Ice-free in April 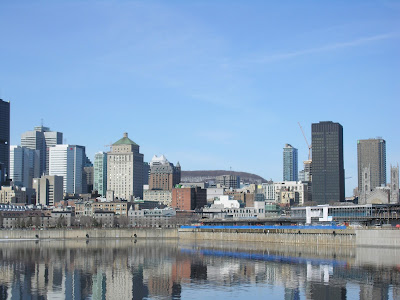 It used to be that just about now the first ocean-going ships would make it up the St. Lawrence to Montreal.  Before then travel on the river would be dangerous or impossible because of ice.

The arrival marked the beginning of trade on the river, and stepped-up life in the city.  Since 1840 the captain of the first ship has been awarded a prize for his exploit, first a top hat, and after 1880 a gold-headed cane.  Accounts from the time say that crowds gathered in the port to greet the ship, as frequently more than one captain tried to be the first  in port.

This year, however, the prize went to a Liberian-registered tanker  that arrived shortly after midnight on January 1.   The port has been open to year-round shipping since 1964 thanks to ice-clearing strategies.  And recently climate change has meant less and less ice on the river even in the dead of winter.

The photo was taken April 3, a glorious day when not much snow was left in sunny places and it would have been relatively easy to manoeuvre a ship into its berth.
Posted by Mary Soderstrom No comments:

Saturday Photo(s):Me and Me and Me 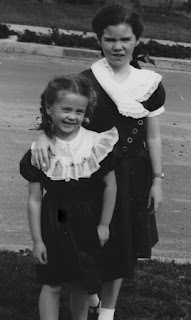 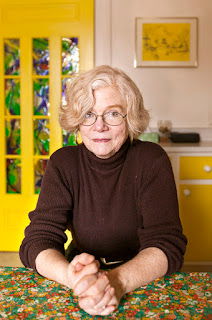 A friend sent me one of those silly tag things this week: you're supposed to post  a photo of when you were younger on your Facebook page, and then challenge anyone who "likes" it to do the same.  Well, I got as far as finding the photo of my sister and me taken about the time we road the Greyhound from San Diego to Eastern Washington state, a trip I write about in Road through Time: The Story of Humanity on the Move. (I'm the older child, and my flaming red hair photographed dark.) But then I ran out of steam, particularly because the people who "liked" the photo, are not ones, generally, who take to this sort of challenge. 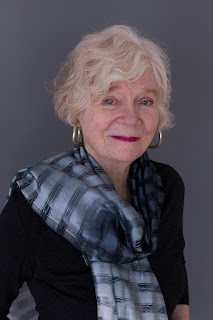 So it stops with me.  But I thought it would be fun to post that photo as well as two others.  One was taken more than ten years ago by Terence Byrne for the Montreal Review of Books when my novel After Surfing Ocean Beach came out.  The other is one of a suite of photos taken by my friend Anne Richard who has reinvented herself as a photographer.  The occasion for the photo session was coming up with a good one for the promotion of Road through Time.   Rather like them.  Lee says I look old, but then he's been with me so many years that perhaps he sees me as I was 50 or more years ago.  One thing he does notice, though, is how my hair has changed colour.  Arctic blonde, not red.  But so it goes...
Posted by Mary Soderstrom No comments: