Saturday Photo: The Rites of Spring and Our Place in the Universe 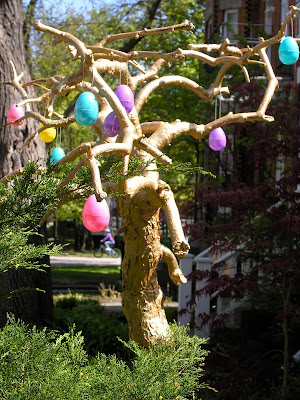 This was taken last year--obviously an Easter egg tree this year would be standing in a pile of snow since we had a nice late winter storm Thursday and Friday.  But it's time to celebrate the coming--or the promise--of the verdant season.  (For other signs, check this out.)

This last week has been aces for such celebrations:  the Equinox on Sunday/Monday;  Norooz, the Persian new year festival on Tuesday; Purim, the raucous Jewish holiday on Wednesday/Thursday; Holi, the Indian one marking the victory of "good" over "bad" on Thursday; and now Easter for Western Christians tomorrow.

The equinox is a good time to pause and reflect on how much our world--full of IT and noise--is actually based on our fundamentally subordinate place in the universe.  No matter what we do, there is no way we can change the fact that we are on a planet that orbits its sun over a period that is somewhat related to, not not quite in sync with its moon's orbit around it or with its own rotation around its axis.

We saw a demonstration of that at the end of February when we all had to make an adjustment as that month was given another day as it does every four years.  If that adjustment weren't made the seasons would soon be out of phase with the months. Another demonstration shows up in the way that  Greek Orthodox Easter comes a month from now.   It always comes after Passover, and Passover won't be for a month because the Jewish calendar this year has an extra month in order keep it more or less in phase, too.  That's what happens when a planet's orbit around the sun isn't quite in sync with its moon's orbit around it, or some such thing.

Makes you feel small, perhaps.  Or maybe just like going in the kitchen and starting to cook for the festivities that will make us feel better about it all.... 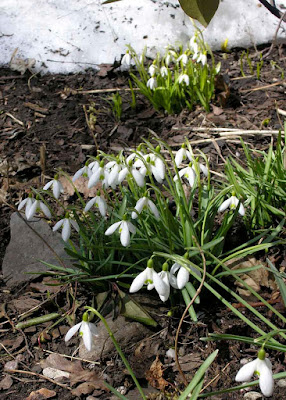 This is not the first time I've posted this photo, but it's right in sync, as the snow drops came up this week.  Had a few days with sun and temperatures above freezing, so they burst out.  This morning the cold made them curl back up, but the promise is there....
Posted by Mary Soderstrom No comments: 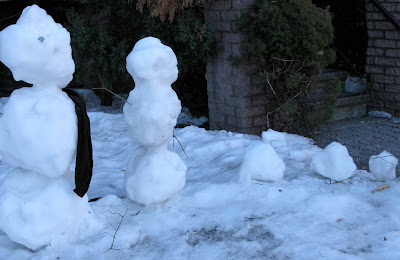 The snow is melting fast.  This means that the snow fort made by the Hassidic boys up the street is just about gone, and all the snowmen fashioned by eager hands lately are on their way out.

Went out without a hat yesterday, the kids didn't wear boots in this afternoon, and the parks were full of people sitting in the sun on benches that have emerged from snow banks.

The equinox is a week away, and the time changes tonight so I guess we're just about ready for a change in season.
Posted by Mary Soderstrom No comments:

Saturday Photo: Literal Blast from the Past... 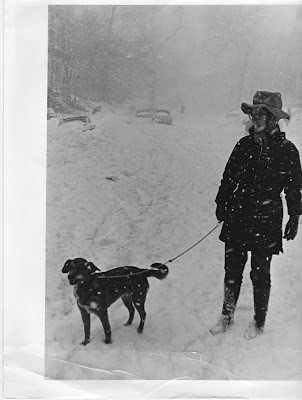 That's me and our dog Trout Fishing in Canada on March 4 or 5, 1971 following the biggest (or second biggest, depends on who's talking) snowstorm in Montreal's history.

We were living downtown then, and things had ground to an absolute halt. Kinda fun, though, and Trout thought it was marvelous.  Another thing notable about the photo is how thin both of us are.  She became very portly toward the end of her rather long life (she died at 13) and I, well, I've put on some pounds too.

Still like hats with brims, though, as well as walking in the snow.

As for Trout's name, as those of you who were around in the '60s and '70s may have guessed, she was named after Richard Brautigan's Trout Fishing in America which both Lee and I liked a lot at the time.  Funny, though, when a friend of Elin's lent us another of Brautigan's books recently, we were left cold.  Could be because there's a reference to some 'elderly folks' who are in their 50s...