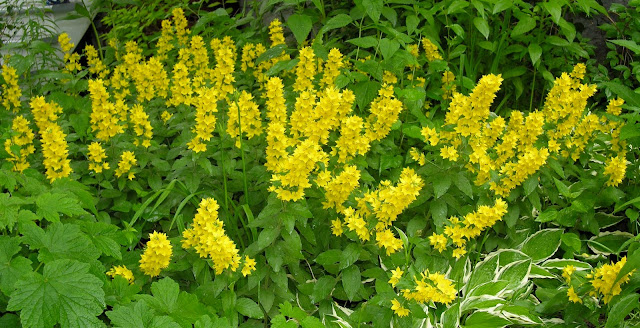 Think I probably posted a similar photo in the past, but at the moment I can't find it, nor can I remember the name of this marvelously invasive flower that is in bloom in our front yard right now.  In a garden of perennials, it does wonders since it provides a splash of yellow for a couple of weeks right after the tulips, daffodils and violets of spring have past.

Bees like the flowers too, and so there's constant coming and going of the beasties.  Good to see them at a time when there is so much bad news about how bees in general are doing.  When you look at the particular, though, some things are doing all right, such as beehives in urban areas.  Not being doused with pesticides makes a big difference.
Posted by Mary Soderstrom No comments:

Lots in the news about what climate change and human intervention in the natural world lately: the Pope's encyclical on the environment is a case in point.
I thought of that this morning when out walking and saw, once again, these signs on several large ash trees on Mount Royal.  Unfortunately the treatment against the emerald ash borer, which was started last fall, didn't work for several that didn't leaf out this spring.  They have become sad ghosts. 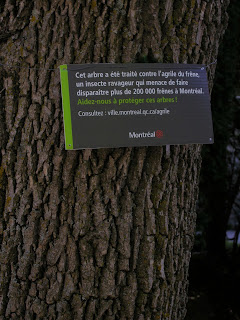 Earlier this week, the city took down several younger ash trees on our street as part of the attempt to contain the disease.  The trees had been planted in the last five or six years to replace aging maples.  All of them appeared relatively healthy, but the strategy is to create a cordon sanitaire around  affected areas, apparently.
They're supposed to be replaced in the near future, but with what I have no idea.  Once again the balance of nature has been upset by the introduction of something.  As Le Devoir reports this morning, we are in the midst of what appears to be the sixth great extinction of life on earth, with consequences that were not even imagined only a few years ago.

Where is the NDP When It Comes to Extrabilling? 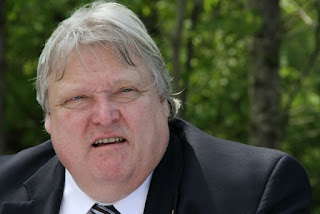 What is happening in Quebec under the Couillard Liberals is extremely discouraging.  Step by step, under the banner of fiscal rigor, the government is privatizing the supply of all services offered to the citizenry.  The evidence is clear as witness the cuts to public education which are not accompanied by similar cuts to financial support to private schools, and the pressure on day cares to reduce their reserves, meaning that they will have to rent facilities from private enterprise, not acquire their own.

The latest thing is the institutionalization of user fees charged by doctors practicing in private clinics.  They are paid by the public system for the care they give, but argue that they can't cover their office expenses  if they don't charge extra.  Of course, any other professional has to figure out how to pay basic costs, and certainly doctors are just as smart as lawyers and accountants so certainly they should be able to do the same.  But that's not an argument I want to get into here.

What does bother me terrificallyis  that under the Canada Health Act which set up the framework of our health system, charging extra fees is not supposed to be allowed.  The idea of eliminating financial barriers to access underlies the whole idea of our Medicare set-up.  Extra billing is contrary to that principle.

To be sure, health is a provincial responsibility, and the cuts in transfers to the provinces from the Federal government gives the Feds less leverage.  But why isn't the NDP, which led the fight for Medicare, protesting the increasing charging of extra fees throughout the country?  Given the desire not to appear to impinge on the provinces,  it might be too much to expect Thomas Mulcair to condemn  extrabilling in Quebec, but there is no reason why he and his team in Quebec can't come out against extrabilling on principle.

The photo, by the way, is of Gaetan Barrette, Quebec's health minister. 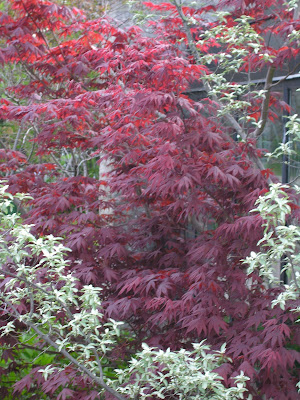 Perhaps because winter closes down so many things, the odors of spring are particularly poignant here.  Oh, there are days when people say "it smells like snow" and there are others when someone's fireplace sends wood smoke into the air. But at no point is the air as full of fascinating smells as spring.

For a while the delicate perfume of tulips and daffodils floated in when I opened the door in the morning.  Then came the heavier smell of lilacs.  Now Russian olives are in bloom, sending a sort of mock orange fragrance everywhere.  At the same time, Japanese maples are at their loveliest.  The combination of gray green leaves and magenta ones is striking.

This sunny morning after a night of more rain, it smells so good that I just don't want to stay inside.
Posted by Mary Soderstrom No comments:

Beauty out of Disaster: And the Birds Rained Down 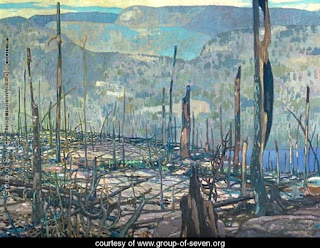 Last night my bookies in Kirkland discussed Jocelyn Saucier's Il pleuvait des oiseaux--And the Birds Rained Down in English translation by Rhonda Mullins-  The story has haunted me all day.

This is not a long book, but it is filled with vivid scenes, intricate relationships, a couple of mysteries and a love story that gives hope to anyone who feels time at his or her back. Saucier says she started doing research on the great fires that swept northern Ontario, Minnesota and parts of Manitoba 100 years ago. Between 1910 and 1920 thousands of square kilometers were burned by wildfires started as mining, logging and settlement moved into formerly lightly settled country. Saucier's heroine, a photographer, is trying to make a record of the survivors and goes looking for the legendary Ted Boychuk, who was rendered temporarily blind yet managed to wander for months, searching for friends and family.

The photographer arrives at an encampment of old geezers two weeks after Boychuk's death, and so never hears him tell his story. She and his friends do discover, however, that he has exorcized his memories by making more than 300 paintings of the time. A woman who also has terrible memories of mental illness arrives on the scene, and the small community changes in a way that no one expects.

Clearly Saucier was inspired by some paintings by members of the Group of Seven: none of them experienced the fires first hand, but several painted the ravaged landscapes. Yet Saucier's story is original and moving. It's success cuts across age groups: even though it has more than its share of very old people, the novel has twice won prizes awarded by college students. Definitely worth reading.
Posted by Mary Soderstrom No comments:

For All You Real Book Lovers... 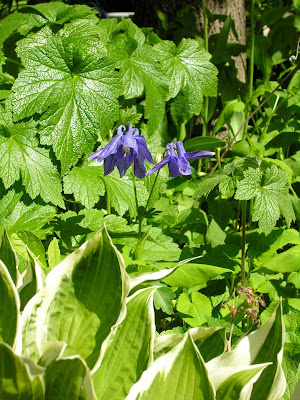 The season progresses, and the wisdom of certain gardening decisions becomes more evident.  At one point I bought a few columbine plants.  They most delightfully have seeded themselves so now, and several of my neighbors, have these lovely flowers in bloom now.

And the air smells sweet.  Last week I kept thinking: lilacs and bird songs.  This week the robins are still staking out their territory, but the delicious perfume is coming from the Russian olives.  Thought a nuisance, invasive species in warmer climates, here the trees are at the limit of their range and so don't spread easily.  When the few in our neighborhood are in bloom, it smells heavenly.