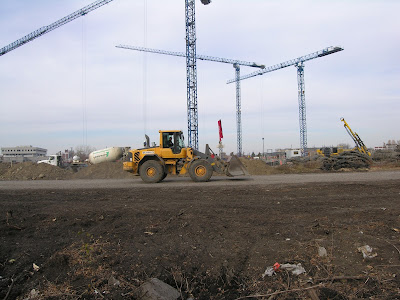 The photo was taken about a year ago when construction began in earnest for the new Université de Montréal satellite campus.  What I wanted to show was the concrete delivery in the background, because I was beginning to think about Rock of Ages: How Concrete Built the World as We Know It.

Happy to say that the writing has begun now: have a plan and about 20 pages written.  Will take a while longer, but it's nice to think that I'm on my way.
Posted by Mary Soderstrom 2 comments: 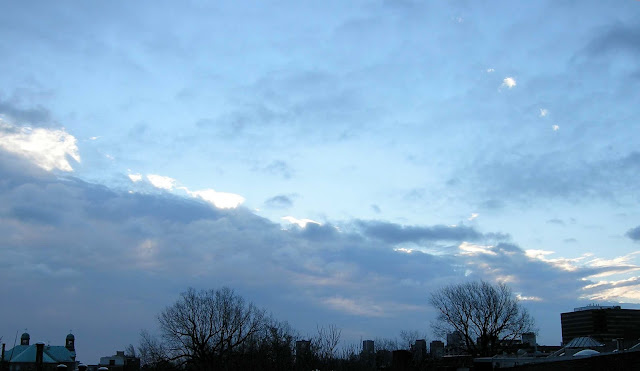 There's been some talk about the possibility of a good meteor show from the Leonids tonight: here's the link to The New York Times story about meteors showers in general, with specific reference to the flurry of meteors that we might see during the period when the earth passes through the region of the solar system full of cosmic junk.

But it's become impossible to see much of anything in the night sky in our neighborhood as residents put up more and more outside lights. I remember seeing Orion on winter nights as I put the car away in the garage, but this week, while I thought I saw the brightest star in the constellation, I had to guess at the rest.  Thomas told me that he and his Dad had seen a planet last weekend--Venus, to hear him tell--but it's very hard for a little guy these days to wonder at the starry sky if he lives in a city.

The wintry wonder of skies like the one shown above are some consolation, I suppose.  With the leaves off the trees, the parade of clouds across the sky is more apparent.  But even scenes like this are menaced.  Earlier this week we had three days of air pollution alerts, occurrences that had become much less frequent when regulations against burning trash and fire places came into effect.  But the climate is changing, as we all know, and other factors have come into play....
Posted by Mary Soderstrom No comments:

Saturday Photo: Concrete, the Material That Builds Our World 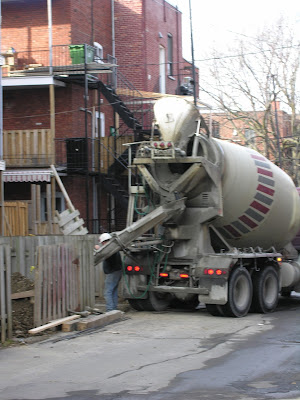 This week I really got rolling on the newest project, a new book to be called Rock of Ages: How Concrete Built the World As We Know It. Making plans to attend a big convention of concrete types, looking at the photos I've taken over the years, reading a lot of notes, and trying to start writing.

This is one of the more humble uses of concrete, improving somebody's parking space.  There are a millions more, and I'm trying to bring some order into my presentation.  Should be an interesting challenge!
Posted by Mary Soderstrom No comments:

The forecast is for rain but the full moon is hanging around just now.  Nice to see....
Posted by Mary Soderstrom No comments: