Saturday Photo: Back to School 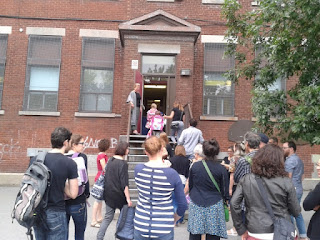 This week Jeanne started kindergarten--hard to believe that she's now five.  Like millions of children in North America, she's said good by to summer, and gone skippingly into a new place to meet new friends and learn new things.

At the same time, teachers and parents in Quebec are protesting budget cuts everywhere.  What short-sightedness!  Our kids need good, public schools where everyone can get a chance to grow and learn. Don't listen to anyone who tells you otherwise.
Posted by Mary Soderstrom No comments: 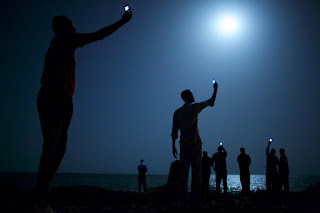 Last year a photo of African migrants holding cell phones up in Djibouti won the World Press Photo prize.  The men were trying to pick up a good signal in order to communicate back home.  Beautiful photo illustrating something that seemed exotic.

But that's not really the case, it appears.  Having a good smart phone is essential to trying to get out of war zones these days, according to The New York Times.   The price traffickers are charging has dropped, in fact, because of competition from what might be called "self-guided" migration.  Facebook pages also have helped people live through crises: one FB group told of safe water outlets in Aleppo when water mains were broken through during fighting.

Fascinating, and also testimony to the degree of sophistication and education of these displaced people from unstable regions.  They could be you or me, were we unlucky enough to live in one of the hotspots. 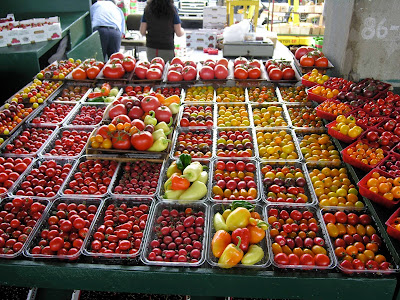 August is a month of many pleasures, not the least being the arrival in markets of real tomatoes.  Most of the years I don't buy them because they don't taste like anything.  But now the choice is almost overwhelming and the possible uses for the lovely golden or red fruit/vegetables are legion.

Now, I can't be sure that these beauties were all picked within a hundred miles of the Jean Talon Market in the centre of Montreal where I found them.  But certainly they are from much closer than the tomato-shaped objects usually on sale around here in other seasons.  Worth waiting for... 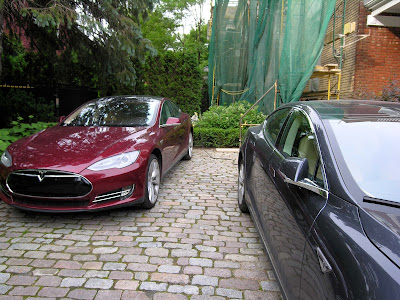 Not that I'm going to make fun of the environmental  concerns of these folks who are shown powering up their two electric cars, but I mean, don't low gas-guzzlers and public transport have more effect on green house gas emissions and all that tra la la?

The house and cars are a couple of blocks over from us, on a street where the houses are single family, very large, and extremely well-kept.  (They were repointing all the brick work when the photo was taken: a good $10,000 or more right there.)

The vehicles also are really classy, and I'm sure the people are cool too.  But I really can't think that these early-adapters represent the wave of the future.  Progress on the environmental front is frequently far more low-tech.
Posted by Mary Soderstrom 1 comment:

Saturday Photo: Proof the Bees Were out 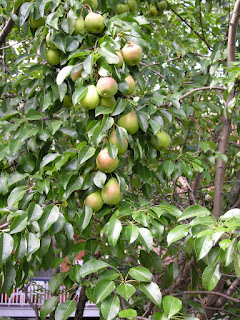 We may end up with more pears this year than the squirrels can eat!  Last year we had perhaps a half dozen but this year there are lots.  I've started picking the ones that look ripe-ish, trying to keep ahead of our bushy-tailed scavengers.

I had feared that last year's dismal crop was due to an absence of bees to pollinate the  pear blossoms, a very sad thought.  The alternate hypothesis centers on the fact that the week the trees were in bloom coincided with a sudden cold snap.  Perhaps teh bees were dissuaded from flying around by the weather, I thought hopefully.

But this year the weather was fine when the trees bloomed, and the fruit set was good.  Now the only thing is to hope that I can pick faster than the squirrels can eat.
Posted by Mary Soderstrom 1 comment: 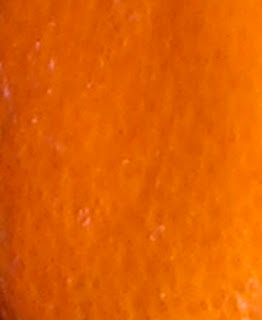 This is from a photo I took of a clementine back in 2011, just after the amazing sweep of Quebec by the New Democratic Party.  Election night was amazing--nobody believed what was happening really, old stalwarts were crying, the young were ecstatic.

Of course, I was glad and amazed at the Orange Wave, but I also was worried because the election ended with Stephen Harper and his Conservatives with a majority government. They were going to have a blank cheque to do whatever they wanted to do.  No matter how effective an opposition the NDP was--and it has proved to be very good--the Harper program was bound to be approved.

The Canadian Federal election called today, six weeks earlier than necessary, will be decided by people who are fed up with Harper and his gang.  It could be that the NDP will win a complete majority--I hope so--but even if the Liberals split the vote, the chances are good that the Conservatives will bite the dust.  I certainly hope so, because, while the NDP has moved to the centre more than I'd like, Thomas Mulcair is a better leader than Justin Trudeau, and the Canadian people need a Prime Minister who cares about issues that matter.
Posted by Mary Soderstrom No comments: