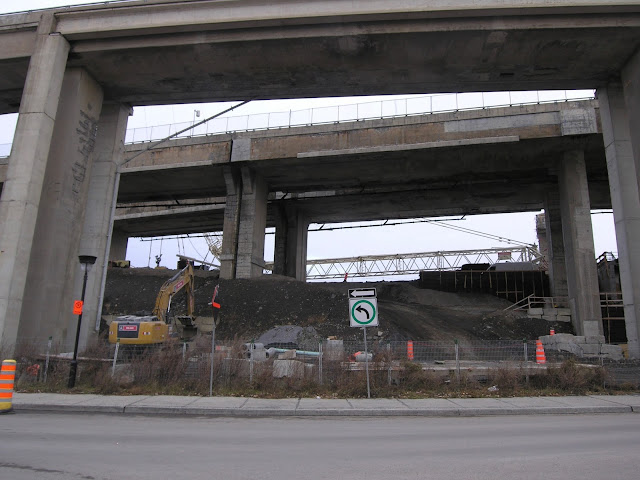 The material that can last for thousands of years, frequently is falling down these days.  This is the Turcot Interchange in Montreal that is being destroyed for all kinds of reasons....

I'm headed off Saturday o learn the latest about concrete at the World of Concrete trade show in Las Vegas.  More later.
Posted by Mary Soderstrom No comments: 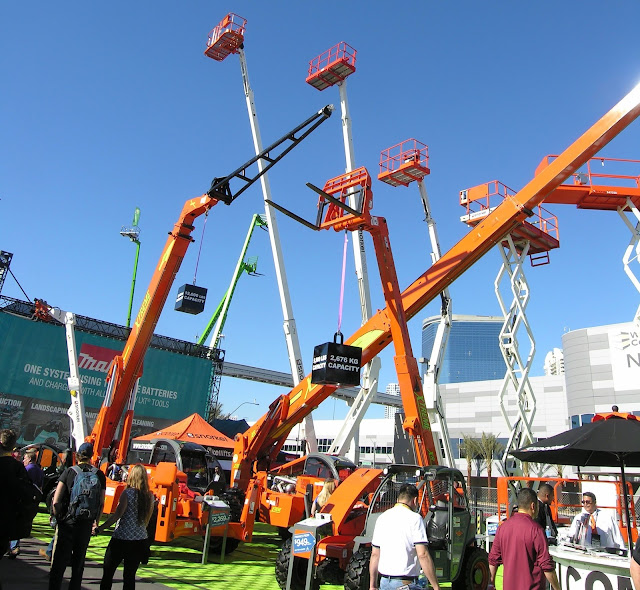 Spent a very interesting few days in Las Vegas learning about concrete and construction at the World of Concrete trade show.  Several thousand attendees and 1500 exhibitors, plus folks like me.  This is a shot of some of the stuff they couldn't get in the exhibit halls.  Most impressive!

The reason for the trip was to research my next non-fiction project, Rock of Ages: How Concrete Built the World As We Know It.  It was definitely worth it. 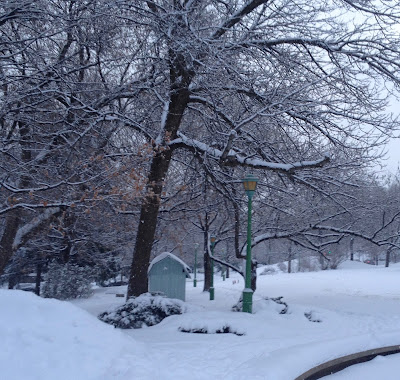 One of the delights of having children is revisiting books you've read as a child, or reading books that have been written since then.  The Chronicles of Narnia by C.S. Lewis are a case in point.  I'm sure I read at least one of them when I was about 12, but then read the whole series to Lukas and Elin.  (Lee may have read some of them, too, I think.)

"It will not go out of my mind that if we pass this post and lantern either we shall find strange adventures or else some great change in our fortunes," says one of the character in The Lion, the Witch and the Wardrobe.  And the spell that has fallen on Narnia is one that means winter forever but Christmas, never.

This scene in a Parc Beaubien reminded me of the stories this week.  The lamp post, the little house, the snow: all were evocative of the best things in the books, so I decided to share it this week.

But as I thought more and more about Lewis and Narnia, I realized that the series, while captivating, has many doubtful elements.  The Witch, for example, could be seen as just a very strong woman: why portray her so negatively?  Later in the series, a horde of brown, mounted adventurers from the South are the enemies for The Horse and His Boy: Arabs, Muslims, foreshadowing of  ISIS?  And there is Aislin who, Lewis said himself, is a Christ-like figure.

I suppose an enlightened parent could use the reading of these parts as teachable moments.  I didn't, and I wonder if I should have even though the kids, by any measure are All Right.
Posted by Mary Soderstrom No comments: 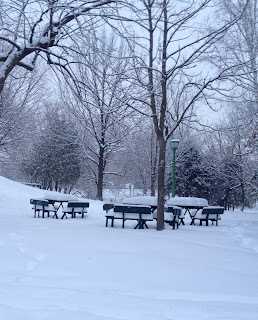 The winter grinds on.  We were spared the Snow Bomb, but the temperatures have plunged again, and what snow fell in the last couple of days was whipped around yesterday.  It even came in under the front door, the first time that we can remember, although we've lived in this house more than 40 years.

All this to say that we must remember we're talking about "climate change," not "global warming."  Extreme weather in other words.  Don't know how we're going to get out of this one.

But I expect that some time--may in July--these picnic tables will be in use by people complaining about the heat.
Posted by Mary Soderstrom 1 comment: