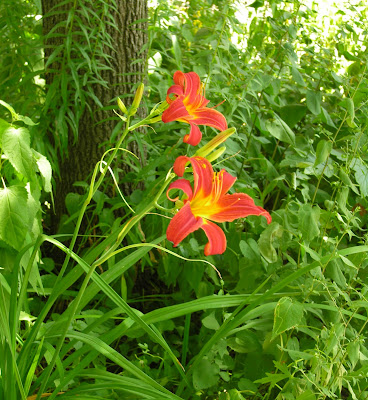 I find myself getting confused when reading about Red States and Blue States in the US.  The Reds are  Republican and the Blues are Democrat, which is just the reverse of the political line up in Canada.  Here the Liberals are Red and the Conservatives are Blue....not to mention the NDP's orange.

So what message is this day lily sending?  Simply that summer is one heck of a time to obsess about politics.  But I can't help myself.
Posted by Mary Soderstrom No comments: 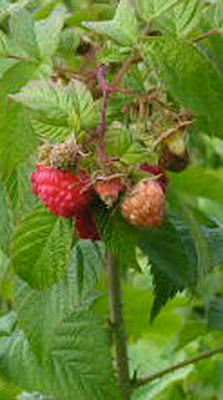 There seemed to be a flurry of comment about last month's Strawberry Moon. Seems Native Americans in the North East States and Canada called it that because wild strawberries were ready for picking then.  Last month's was special, those who care about such things said, because it coincided with the solstice.

This week the full moon was extraordinary, and according to The Old Farmer's Almanac, it's the Full Buck or Thunder Moon.  The former apparently refers to the fact that male deer start growing their new antlers: who knew?  The latter seems to me to resonate more with us city dwellers.  Certainly we've had thunder storms several days this week.

But if June is the Strawberry Moon, then July could be the Raspberry Moon.  They're at their peak around here right now.  Delicious!
Posted by Mary Soderstrom No comments: 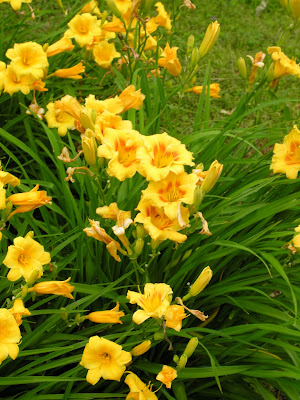 A long time ago my son had to take a class that when I was an adolescent would have been called Home Ec (the only advance in his day was that both boys and girls took it.)

One of the units was on home decoration (!) and a colour wheel was given with what colours were good for what purpose that the kids were supposed to memorize.  I forget what they all were, but I remember that blue was supposed to be calming.

So, there was a test and one of the questions was: your friend is very upset about what's happening in his life and can't sleep.  What colour would you suggest he paint his room?

Lukas answered "yellow."  His reason was that yellow was such a cheerful colour, his friend would feel better.  The teacher said no, the answer was blue because it was restful.

Lukas was furious and so was I, but he was of an age when he was starting to fight his own battles so I don't think I intervened. In the end he got
part credit because his reasoning was good, as I remember, but I think his point is very well taken: yellow is cheerful.

Given the long string of sad and troubling news this week--the Nice craziness, attempted coup in Turkey, Trump and Hillary neck and neck in the polls, and the list goes on--we're all in need of some cheerfulness.  So here are yellow day lilies which conveniently are in bloom in my back yard right now in hopes that they will make you feel better enough to continue the fight. 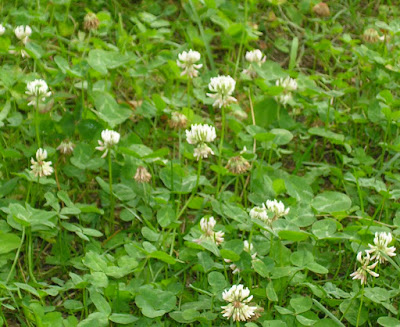 When something is going good, you can say that it's in clover.  Certainly thing are not going in the world these days, but it's nice to know that clover still is growing in the most unusual places.

This was taken in a corner lot that had been left to go to ruin--only I don't think clover looks bad at all.  Hope no one cuts the grass--although the smell of fresh cut clover is delicious. 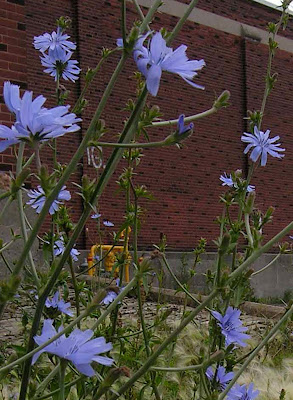 The fields along the CPR track through Mile End was full of dancing blue chicory (Cichorium intybus) flowers this morning. A lovely sight.

The plant, of course, is an invasive import from Europe.  Some have used it roots for a coffee substitute, and apparently it makes good forage for cattle.

But mostly the plant has escaped along the roads of North America, colonizing waste spaces, beautifying urban and rural landscapes.

Like so many other immigrants, it has made its place here.  Thank goodness.
Posted by Mary Soderstrom No comments: