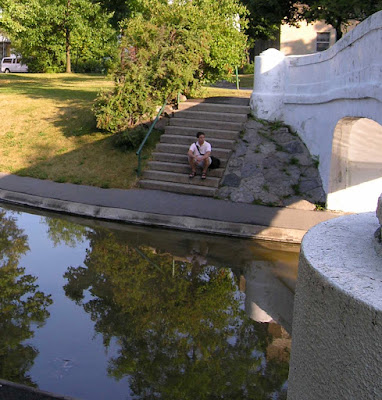 Hot weather.  Time to get out in the morning and then cool it inside...

We were in the parks at 8:30 a.m. Often go walking at that hour, but the boys spent the night with us, and they were ready for action early on.  Spent some nice time in the various parks.  Nice to have them so close (and "them" means both parks and grandsons.)

Now the old folks are resting, since the kids have gone home. ...
Posted by Mary Soderstrom No comments:

Saturday Photo: The Ducklings Are Back..

The ponds in our neighborhood parks are home some years to duck families.  This is the first time I've seen one in this particular park which is one of the most used.  Visited daily by masses of kids, exercisers and loafers, you wouldn't think it would offer much shelter.

But obviously it does, because the eight little guys I counted (couldn't get them all in the photo at one time) are too small to have flown here.  The nest must be in nearby bushes, and remained undiscovered long enough for the eggs to hatch.

Nice to see them.  A delight to know that there's still some nature in the city.
Posted by Mary Soderstrom No comments: 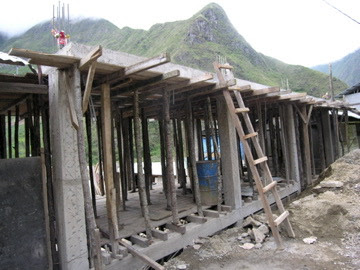 Moving toward the home stretch for my book Rock of Ages: How Concrete Built the World As We Know It. The University of Regina Press wants a draft by the middle of July, so it can be published sometime in 2019.

So I'm hard at work.  Among the things I'm doing is looking at the photos I've taken in my various travels to see what role concrete has played in the places I've visited.  The photo is of a building under construction in the little town in the Amazon basin where my bus stopped on the trip I took across the Andes from Cusco, Peru to Rio Branco, Brazil.  (For more about that, see Road through Time: The Story of Humanity on the Move.)  Definitely artisanal, DIY work, but it's also testimony to the ubiquity and usefulness of concrete.
Posted by Mary Soderstrom No comments: 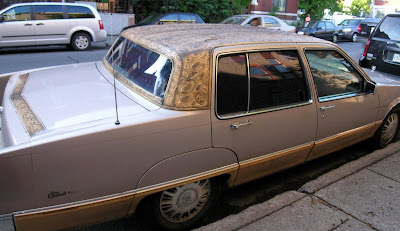 Woke up about 2 a.m. to the sound of cars racing.  This is Grand Prix weekend and the town is full of wannabes who are driving muscle cars too fast.  I suspect they were racing down Park Avenue which at the hour is usually deserted.

It was a moment when you listen, almost hopefully, for a crash.

Cars are useful.  But like fire, they need to be controlled.  I'm a born-again pedestrian and I definitely could do without so much vehicular traffic on our streets.

But last year, this lovingly decorated oldie caught my eye.  Don't know if you could race it.  Probably not, thank goodness.  Somebody, however, thought a lot of it.

The exception that proves the rule that cars are a pox on civilization?
Posted by Mary Soderstrom 2 comments: 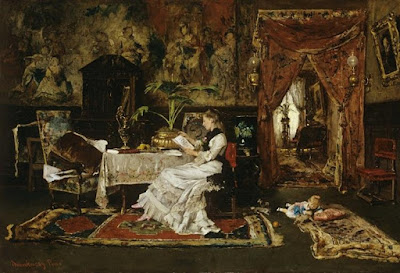 Well,  it really isn't a photo, but a painting  done by the Hungarian painter Mihály Munkácsy in the 1890s.  Called "Paris Interior" in some places, it captures an era, as well as the calm delight of reading. Even the child on the floor seems to have escaped the heavy (if rather lovely) atmosphere of the salon.

Which brings me to reading lists.  I animate (the French word for moderate which I like a lot better) five book discussion groups in Montreal libraries, and this is the time to come up with reading lists for the season beginning in the fall.  Below you'll find what the groups will be reading, with the books in no particularly order. Note that these are not the only good books out there, but four of the five groups provide copies for the members, which means that only books for which there are 10-15 copies in local libraries make the cut.


A Gentleman in Moscow by Amor Towles

Bone and Bread  by Saleema Nawaz
Our Souls at Night by Kent Haruf
Lost in September by Kathleen Winter
Swing Time by Zadie Smith
The Magic Strings of Frankie Presto by Mitch Albom
Behold the Dreamers by Imbolo Mbue
The Best Kind of People by Zoe Whittall
The Seven Sisters by Margaret Drabble
The Human Stain by Philip Roth
Indian Horse by Richard Wagemese
Daughter of Fortune by Isabelle Allende
The Widow by Fiona Barton
The Door by Magda Szabo
419 by Will Ferguson
Larose by Louise Erdrich
The story of Arthur Truluv by Elizabeth Berg
Vanity Fair by William Makepeace Thackeray
The Signature of All Things by Elizabeth Gilbert.
Exposure  by Helen Dunmore
Indian Horse by Richard Wagemese
The Women by T.C. Boyle
The Free World by  David Bezmozgis
The Road Past Altamount by Gabrielle Roy
A House for Mr. Biswas by V.S. Naipaul
Snow Falling on Cedars by David Guterson
The Perfect Nanny by Leïla Slimani
One Hundred Years of Solitude by Gabriel García Márquez
The Little Red Chairs by Edna O'Brien
The Ministry of Utmost Happiness by Arundhati Roy
Pachinko by Min Jin Lee
Norse Mythology by Neil Gaiman
Sélections en français