Saturday Photo: What to Read...

2021
September 1
Klara and the Sun by Kazuo Ishiguro (Nobel Prize for literature 2017)
Klara and the Sun, tells the story of Klara, an Artificial Friend with outstanding observational qualities, who, from her place in the store, watches carefully the behavior of those who come in to browse, and of those who pass on the street outside. She remains hopeful that a customer will soon choose her. The book offers a look at our changing world through the eyes of an unforgettable narrator, and one that explores the fundamental question: What does it mean to love?


October 13
Who DoYou Think You Are? Alice Munro (Nobel Prize for literature 2013)
Rose and her stepmother Flo live in Hanratty -- across the bridge from the "good" part of town. Rose, alternately fascinated and appalled by the rude energy of the people around her, grows up nursing her hope of outgrowing her humble beginnings and plotting to escape to university.
Rose makes her escape and thinks herself free. But Hanratty's question -- Who do you think you are? -- rings in Rose's ears during her days in Vancouver, mocks her attempts to make her marriage successful, and haunts her new career back East as an actress and interviewer.


November 10
The Hungry Tide by Amitav Ghosh
Off the easternmost corner of India, in the Bay of Bengal, lies the immense labyrinth of tiny islands known as the Sundarbans, where settlers live in fear of drowning tides and man-eating tigers. Piya Roy, a young American marine biologist of Indian descent, arrives in this lush, treacherous landscape in search of a rare species of river dolphin and enlists the aid of a local fisherman and a translator. Together the three of them launch into the elaborate backwaters, drawn unawares into the powerful political undercurrents of this isolated corner of the world that exact a personal toll as fierce as the tides.

December
March by Geraldine Brooks
From Louisa May Alcott's beloved classic Little Women, Geraldine Brooks has animated the character of the absent father, March. Brooks follows March as he leaves behind his family to aid the Union cause in the Civil War. His experiences will utterly change his marriage and challenge his most ardently held beliefs. Pulitzer Prize 2006


2022
February 9
The Beekeeper of Aleppo by Christy Lefteri
Nuri is a beekeeper; his wife, Afra, an artist. They live a simple life, rich in family and friends, in the beautiful Syrian city of Aleppo--until the unthinkable happens. When all they care for is destroyed by war, they are forced to escape. But what Afra has seen is so terrible she has gone blind, and so they must embark on a perilous journey through Turkey and Greece towards an uncertain future in Britain. On the way, Nuri is sustained by the knowledge that waiting for them is Mustafa, his cousin and business partner, who has started an apiary and is teaching fellow refugees in Yorkshire to keep bees.

March 9
The Bastard of Istanbul by Elif Shafak
As an Armenian American living in San Francisco, Armanoush feels like part of her identity is missing and that she must make a journey back to the past, to Turkey, in order to start living her life. Asya is a nineteen-year-old woman living in an extended all-female household in Istanbul who loves Jonny Cash and the French existentialists. The Bastard of Istanbul tells the story of their two families--and a secret connection linking them to a violent event in the history of their homeland.


April 13
Heart of Darkness by Joseph Conrad
This story within a story follows Charlie Marlow, whose job was to transport ivory downriver, and who develops an interest in i an ivory procurement agent, Kurtz, who is employed by the government. Preceded by his reputation as a brilliant emissary of progress, Kurtz has now established himself as a god among the natives in “one of the darkest places on earth.” Marlow suspects something else of Kurtz: he has gone mad.

A reflection on corruptive European colonialism and a journey into the nightmare psyche of one of the corrupted, Heart of Darkness is considered one of the most influential works ever written.

May 11
Indians on Vacation by Thomas King
Inspired by a handful of old postcards sent by Uncle Leroy nearly a hundred years earlier, Bird and Mimi attempt to trace Mimi’s long-lost uncle and the family medicine bundle he took with him to Europe. By turns witty, sly and poignant, this is the unforgettable tale of one couple’s holiday trip to Europe, where their wanderings through its famous capitals reveal a complicated history, both personal and political.


June 8
Emancipation Day by Wayne Grady
With his curly black hair and his wicked grin, everyone swoons and thinks of Frank Sinatra when Navy musician Jackson Lewis takes the stage. It's World War II, and while stationed in St. John's, Newfoundland, Jack meets the well-heeled, romantic Vivian Clift, a local girl who has never stepped off the Rock and is desperate to see the world. They marry against Vivian's family's wishes--hard to say what it is, but there's something about Jack that they just don't like--and as the war draws to a close, the new couple travels to Windsor to meet Jack's family...

Saturday Photo: The Animals of My Neighborhood...and Jokes 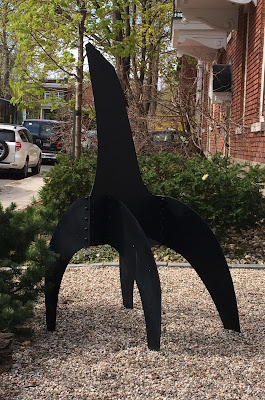 When this Covid business started and I was effectively cut off from our grandchildlren, I looked around for ways to keep in contact with them.  Sending letters was a partial solution even though we live in the same city.

Last spring I wrote a series of stories about our extended family, which included tales of the Spanish Flu epidemic a hundred years ago.  Then, having covered the bases there, I looked around for more things to send in the mail.  These include a series of photos of the strange animals around our neighborhood, like this urban wolf that howls not far from the Outremont Métro station.

But, the kids tell me, nothing beats jokes, so I've been looking for suitable ones in both English and French.

Here's favourite of the youngest (4 1/2: Two mothers are talking  while their children play in the sandbox.

"My baby has been walking for three months now," says one.

"You better go looking for him," says the other.  "He's probably a gone a long way in that time."

Well, I guess we have a new category to join the "Dad joke" one: it's the Kid joke.

Saturday Photo: May Afternoon at Giverny 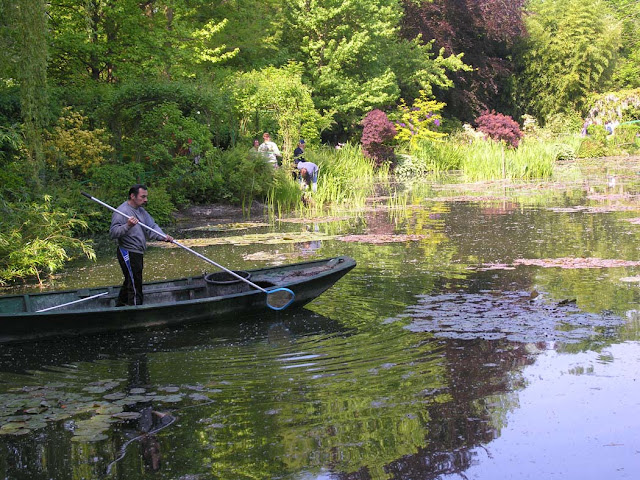 Twice in May we visited Monet's garden at Giverny, north of Paris.  It was a lovely experience each time, with the flowers in full bloom and the weather wonderful.  The second time we walked back to the train station at Vernon along country roads that were equally splendid.

How nice it would be visit again.  Not this year for sure. 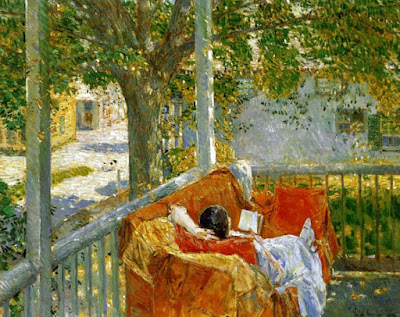 I love this painting called Couch on the Porch, Cos Cob, by Childe Hassam.  Painted in 1914, it captures the feeling of summery days, pre-airconditioning.

Would love to have your ideas for summer reading, or for book groups next winter.