Saturday Photo: Not Just Maples and Oaks and etc. 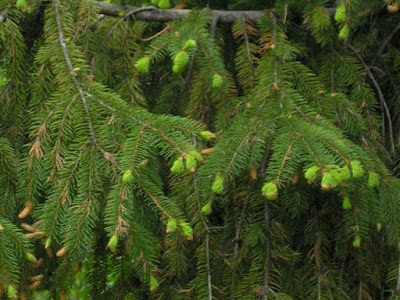 Everything starts growing this time of year.  Here is a photo of the brilliant new growth on a deciduous tree.  Don't know the name--I'm not good with those of plants--but I'm struck by the power of renewal in plants.

Reminds me of the title and first line of Dylan Thomas's poem The Force That through the Green Fuse Drives the Flower. The rest is rather like those brilliant still-lives of fruit and flowers that always show some decay to remind us of our mortality.

Saturday Photo: Bumper Crop of Violets, the Other Side of Invasive 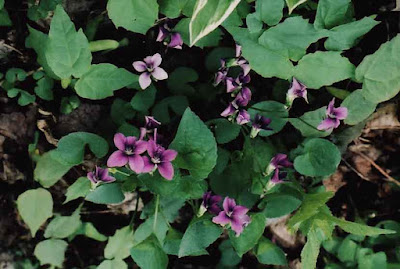 I love invasive plants.  Or Darwinian gardening, if you prefer. In my book, an attractive plant that has expansive tendencies is wonderful, because it will push out less attractive plants that aren't so aggressive.

That's why I planted violets in the front garden a few years ago.  Now they have taken over a fair amount of it and the neighbor's little yard.  Transplanted to the back yard, they now are making a wonderful show.  Of course, the little treelets are some competition, and I spent part of yesterday afternoon taking many out.  But still, what a delight to see so many lovely little flowers growing expansively on their own.
Posted by Mary Soderstrom No comments:

Saturday Photo: To Ope' Their Trunks the Trees Are Never Seen... 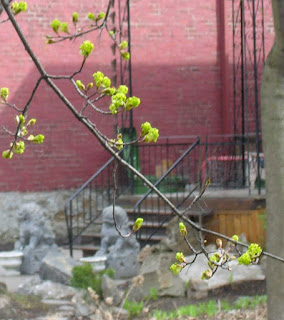 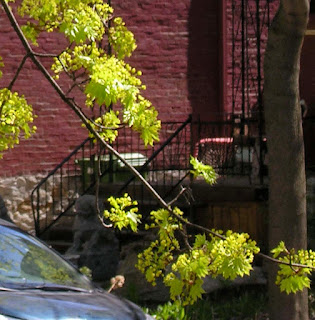 ...How Then Do They Put on Their Robes of Green? "

Good question!  I always think of that song we sang  in my Southern California childhood this time of year in Montreal.  Back then there wasn't much seasonal difference in foliage and I remember puzzling about the words.  Here, though, the difference is nothing but miraculous.

The photo on the left was taken April 29 a few years ago, and the one on the right, three days later.  The great spurt of growth usually comes in the first week in May, when the bare branches a transformed into clouds of yellow green, and then into leafy shade.  The change has come a little later this year--leaflets just coming on now because of a week of very cool temperatures--but it is none the less something wonderful.

The last line of the song is: "They Leave Them Out!"  Another puzzle, until you realize that it's a pun.  Too sophisticated for kids, maybe.  Or maybe not... 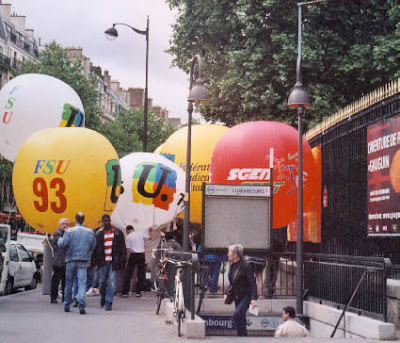 There's been a lot in the press here about the fiftieth anniversary of the uprising in Paris. Certainly 1968 was a year of unrest, particularly among the young there and elsewhere.

But that's not the whole story. We were in Berkeley in 1964, where things got really started.  At issue were a number of things: the increasingly hot American War in Vietnam, the Civil Rights movement, and on the campus the Free Speech Movement which protested university restrictions on who could speak on campus.

And then there were other fights there, here in Montreal and in Paris again.  The photo was taken 15 years ago during a conflict over retirement rules, a battle that continues.  We went looking for the demonstration, and found these teachers preparing to march near the Jardin de Luxembourg. We could see when we arrived that this was only a gathering point, not the place where the demonstrations would begin, and when we asked where the starting point was, people looked at us in astonishment.  Seemed everyone knew it was la Place de la République. Only tourists had to ask...

Things still are hot in France.  I found a website that lists all the demonstrations this week, for those of you who might like to participate.  Today it's: