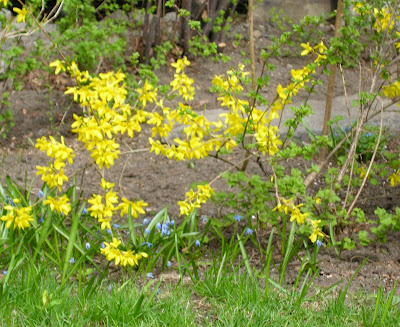 Next up: forsythia.  The first week in May is the week when the trees leaf out here.  While the last week was pretty cold, with temperatures below freezing several mornings, the little leaflets seem to be plumping up nicely.  So with any luck by this time next weekend there will be the lacey tracery of leaf shadows falling on the ground.

In the meantime, the forsythia is beginning to come out.  Love the colour.  Yellow rules...
Posted by Mary Soderstrom No comments: 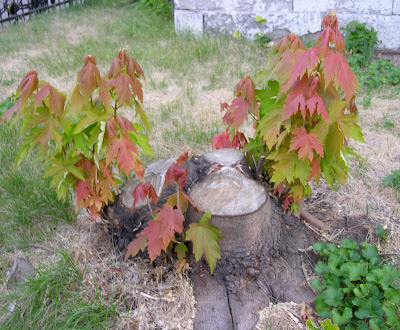 Always is nice to see how the force that through the green fuse drives the flower (as Dylan Thomas put it) continues to work. Here's a photo I took, plus a slide show that is truly lovely.
Posted by Mary Soderstrom No comments:

Took this a few years ago when I was in Chicago when the scylla was in bloom.  This year the firsts ones are shaking their little blue heads and spring begins.

Other signs of spring: people whizzing around on Bixis which went into service at midnight Friday, kids asking their parents for ice cream on a lovely Saturday afternoon, and me trying to remember what I thought I sould do in the garden this spring.  So much for keeping records: I may do a good job when I'm reporting/researching something, but I always forget that I mean to plan out the next year's garden when the memories of the last year's one are still vivid.
Posted by Mary Soderstrom 2 comments: 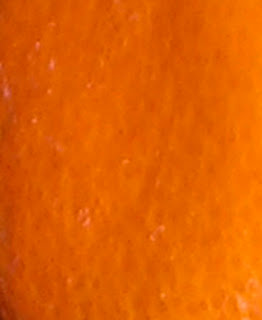 Or something like that.  Didn't post on the weekend because of visits from grandkids and dinner guests (yes, dinner guests: the young'uns were surprised to learn that Grandma and Grampa actually have friends!)

But there also was a good reason to wait--the NDP convention.  I didn't go, and I was not shy about saying that I thought the party--my party for so long--had gone terribly astray during the last election.  To let Justin Trudeau run to its left!  What a terrible abandoning of what the NDP has always been in Canada--the voice on the Left with the good ideas.

That the stunning repudiation of Thomas Mulcair appeared to be a surprise to those close to him shows just how little they'd been listening to the rank and file, or for that matter the electorate.  It's not having lost an election that's a problem. It's having lost an election by running on Centrist ideas.  And it's not that Mulcair and company weren't warned.

Full disclosure is necessary on that point: I was president of Mulcair's riding association from 2011 to 2013, so I knew to whom to send emails when Lee (an economist) wanted to point out the fallacy of running on a no-debt platform at a time when the economy needs stimulus and interest rates are very low.  Similarly, for years I've tried to get Mulcair to take a more pro-active stand on protecting the Canada Health Act and our single-payer system.  There were others in the party who also blew whistles but weren't listened to.

So we shall see what we shall see.  In the meantime here's bit of orange I clicked back when the world seemed to be going Orange in 2010-2011....
Posted by Mary Soderstrom 2 comments:

Saturday Photo: Bougainvillea, or a Plant from Away 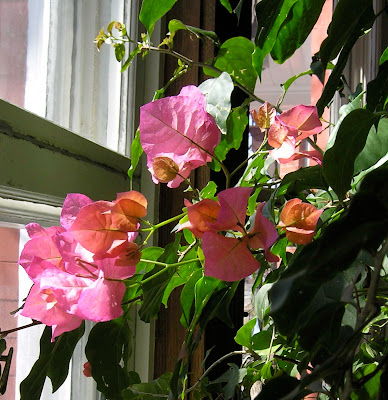 It's not often that my bougainvillea blooms, but this year it has.  Not sure why.  Certainly it's not because it's received a great deal of sun.  The gray, rainy weather has apparently not dissuaded it, though.

The plant is a native of South America, and it's blooming is appropriate because I'm up to my neck in books about Brazil and Spanish South America for my next non-fiction project, a book to be called Unidentical Twins.

But it also reminds me of my mother.  Bougainvillea was one of the few plants she could grow.  She always had a massive bush on the east side of the house in San Diego, which I remember with great pleasure.
Posted by Mary Soderstrom No comments: