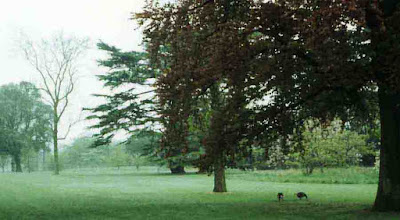 Last Monday was supposedly Blue Monday, the most depressing day of the year.  Well, my mother always said that January was the longest month of the year, and perhaps its third Monday is indeed a down day for a lot of people.

It turns out, of course, that the whole idea of Blue Monday was dreamed up by a travel agency.

But nevertheless the gray weather we're having now (a lot of snow would be much more fun!) has got me thinking about travel.

The photo was taken nearly 20 years ago when I began my travels.  It's of Canada geese in the Royal Gardens at Kew, and I was working on my first non-fiction book Recreating Eden: A Natural History of Botanical Gardens.     Now I'm thinking of going on the road for another non-fiction book--my eighth--which will be about how people have coped with fluctuating sea level over time.  The place I'm headed is Indonesia, where the government is planning to move the capital from Jakarta to another island to remove the low-lying city from being drowned.

I had hoped to go sometime this spring, but for various reasons it looks like I won't go before September.  But it's going to be fun to plan as this winter rolls on. 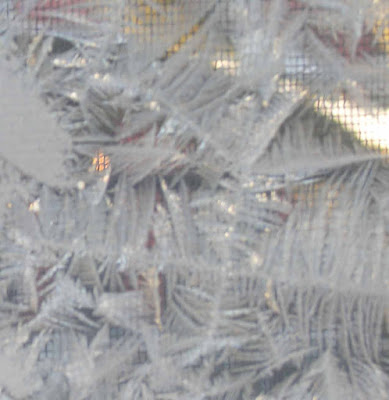 ...and it may be colder in the Prairies and, good heavens, what about the snow in Newfoundland, but it's pretty frosty here too.

Just came in.  Think I'll stay in for a while....
Posted by Mary Soderstrom No comments: 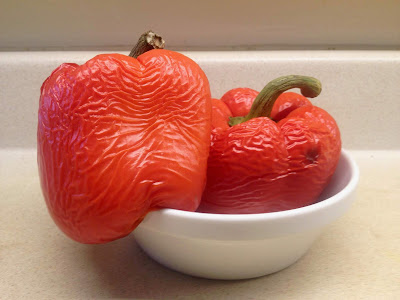 John McPhee, one of my favourite writers, has a lovely piece in The New Yorker this week.

In it he writes about a meeting with the novelist Thornton Wilder when he was a young man, at a time when Wilder's reputation was near its height.

McPhee was astounded to learn that Wilder, then 66,  was spending his days cataloguing the plays of Lope de Vega who wrote some eighteen hundred full-length plays of which 431 survive. He writes: Callowly, I asked him, “Why would anyone want to do that?” 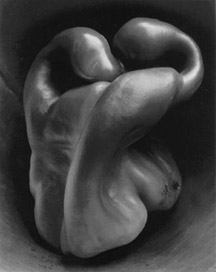 McPhee's question infuriated Wilder, and their meeting thereafter was not a cordial one.  Nevertheless, the young McPhee thought "the question deserved an answer. And I couldn’t imagine what it might be."

But, he continues, "I can now. I am eighty-eight years old at this writing, and I know that those four hundred and thirty-one plays were serving to extend Thornton Wil­der’s life. Reading them and cataloguing them was something to do, and do, and do. It beat dying. It was a project meant not to end."

And I understand that now.  Keeping busy, being curious, doing those interesting  and perhaps necessary things are what keeps some of us going.

But, you may ask, do these two photos have to do with that.  The sleek and sensuous one is one by Edward Weston, taken in the fullness of his genius.  The other is of two red peppers I baked not long ago in order to have roasted pimento for some dish I intended to cook.  Both photos, I think, are quite lovely, but one represents youthful talent and joy and the other, what happens as we age. 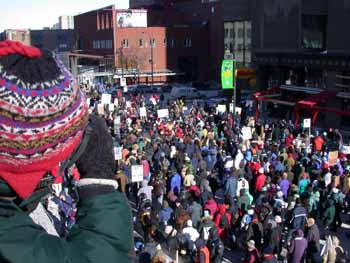 Must credit Jacques Sabourin for this photo taken February 15, 2003 when something like 200,000 people turned out in Montreal to protest again a war in Iraq.

We were there, and I've never been prouder to be Canadian, because this march probably tipped the scales against Canadian involvement in that stupid affair.  The march last September against climate change was bigger, but, let's face it, it's a lot harder to protest when your breath is freezing on your face. 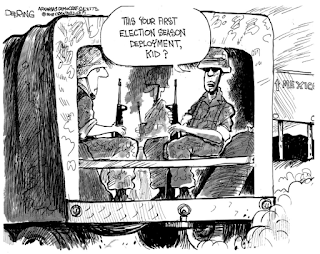 Unfortunately we may be back where we started.  I've spent far too much of my life protesting war, yet if something is organized soon, count me in.  The US strike that killed Qassem Soleimani was ill advised, making things a whole lot worse.  Furthermore, reaction to it is going to sap energy that might be better expended in getting a Democrat elected to succeed Donald Trump as president of the US.

Of course, that's part of the strategy you may be sure.  Thanks to John Deering of the Arkansas Democrat-Gazette for the telling cartoon.