Satruday Photo: Not a Trojan Horse, but More Whimsy 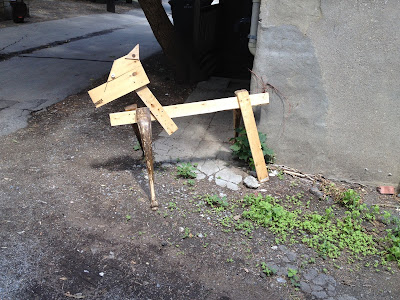 Because we all need a little whimsy these days, here's what I found in an alley not far from me.

Couldn't do much carpentry on this saw horse, but kudos to whomever put it together.  Creativity can blossom when times are tough...
Posted by Mary Soderstrom 1 comment:

Saturday Photo: Concrete, Not the Rock of Ages...Nor Is the US 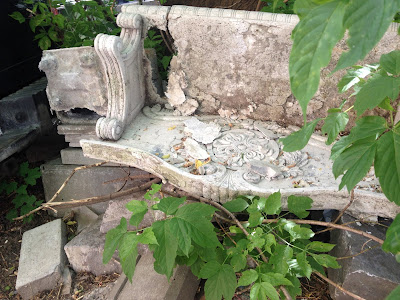 The photo was taken last summer in front of a house that was being renovated.  Probably built in the early 1900s, it obviously had a lot of details that were high-end at the time.  This bench--from the backyard, the front garden?--hasn't passed the test of time, however.

I'm posting it today because yesterday I got the publicity package for my next book, Concrete: From Ancient Origins to a Problematic Future.  The task for the weekend will be to look it over to see what the publicists are proposing.

But there's another reason: the terrible suspicion that things we formerly though solid as a rock--like democracy in the US--are rapidly being eroded.  The Covid-19 case numbers just keep spiraling upward, and 45 seems hell-bent to use any means possible to use it as a way to get re-elected.  Just as troubling is the use of Federal forces to "bring order" to Portland OR.  According to the New York Times:

"The arrival of a more aggressive federal presence came after President Trump, who at one point called on states to “dominate” protesters, directed federal agencies to increase their presence to protect federal properties, including statues and monuments that have at times been the target of protesters. Mr. Trump said last week that he had sent personnel to Portland because “the locals couldn’t handle it.”

What's going to happen when he loses the November election?
Posted by Mary Soderstrom 1 comment: 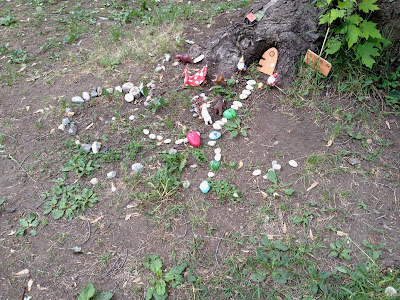 Everybody was getting a little squirrely this spring, as we tried to out dance Covid 19 by staying at home.  It helped some that March, April and the first of May were cold and pretty wet here.  But then finer weather arrived.

Kids were still at home, supposedly learning remotely, but the outdoors beckoned.  Playgrounds were still closed, and it took a bit of imagination to find things to do.

Some children on my granddaughter's street took things into their own hands, and built a little scene that they could control.  Love this bit of whimsy in a world that isn't whimsical at all.

The construction/installation is now obscured by grasses and perennials, but it's a good memory from a season where there weren't many.
Posted by Mary Soderstrom 1 comment:

Saturday Photo: The Up-side of Drought... 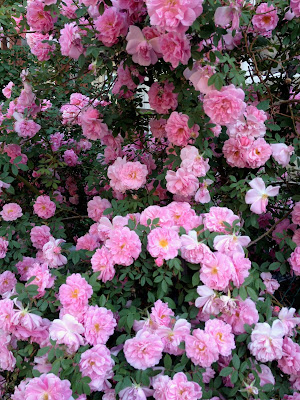 It must be the sun, and maybe the cool, wet spring, but even though it rained very little in May and June the roses here have been spectacular.  The ones in our yard have done better than most years, although not enough to rate a blog-post photo...

These which I found on a neighbouring street however, are not at all the exception.  An abundance of blossoms that have lasted at least a week despite some pretty hot days and a semi-drought.  Does the heart good in this time when we can use ever bit of encouragement we can get.
Posted by Mary Soderstrom No comments: