Before Its Time? Manifest Destiny, a Short Story 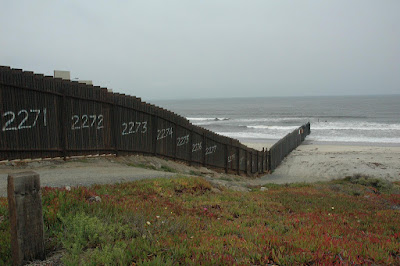 The story below appeared in my short story collection, Finding the Enemy, published in 1999 by Oberon Press.  Given the news today of a caravan of refugees at the US/Mexico border, it seems "déjà vu all over again.

Saturday Photo: Blue Grass, Sort of, on a Foggy Mountain...

The photo actually is one I took several years ago in Chicago of scylla blooming in a park.  But my front yard looks similar right now as the lovely little blue flowers--the second ones that bloom in my garden each spring--have made their appearance in force.

This is what Kentucky bluegrass is like, pretty but not at all the same thing.


And this is what Blue Grass sounds like: the inimitable Earl Scruggs and Foggy Mountain Breakdown. 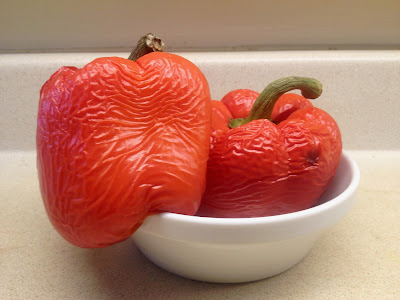 I've always admired the sensual photographs of fruit and vegetables by Edward Weston.  He did a number of lovely photos of nudes and rocks, but nothing quite beats his peppers and pears.  Apparently he got in trouble once because one of his stilllifes looked far too much like  the backside of a woman so that his photo was removed from a show... 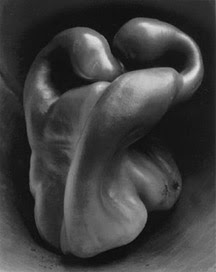 Be that as it may, I was delighted when two red peppers that I roasted in the oven in order to use them later as pimento in cooking turned out to look so much like Weston peppers that had aged. The slightly sagging bottom, the wrinkled skin, the age spots--I can relate to that these days.  But beauty and pleasure is where you find it, one must remember...
Posted by Mary Soderstrom No comments:

Saturday Photo: Trying to Get a Jade Plant to Bloom in a Difficult World 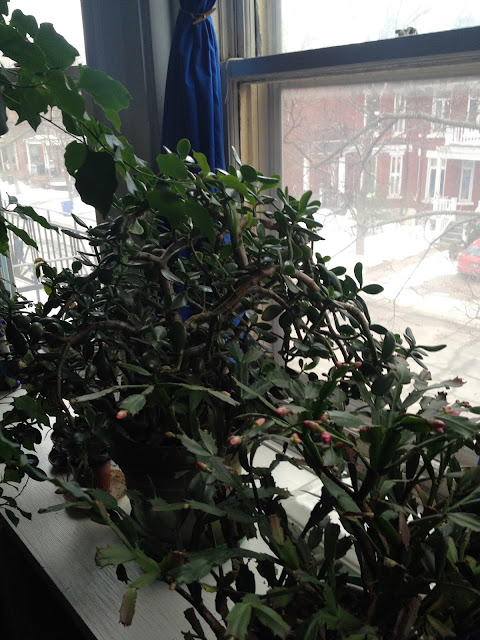 There are some plants I can get to bloom year after year.  The various sorts of Christmas cactus are one, and recently I've been having pretty good luck with hibiscus.  But Jade Plant, also called crassula, is one I would love to see blooming, but which is resisting my attempts to recreate the circumstances in which it flowers naturally.

Thalassa Cruso in her classic guide to indoor gardening, Making Things Grow, talks about hers rewarding her with fragrant flowers every spring. My mother--never much of a gardener--had  big one that bloomed occasionally when I was a kid in San Diego.  But I've never got a flower.

Apparently the plant is a native to a coastal Mediterranean-type climate, so I'm trying to imitate the conditions.  It's not easy, as you can see in the photo which shows the snow outside.  But I'll keep trying.

Of course, it's an insignificant challenge considered against the problems of the world.  But sometimes finding solutions to small things gives one the energy to go to bigger ones...
Posted by Mary Soderstrom 8 comments: 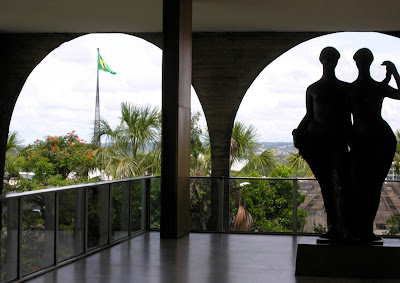 Sad news from Brazil about the right wing campaign to stamp out any politician to the right of centre.  Lula (former president Luiz Inacio Lula da Silva)  this morning still seems to be holding out, but we shall see...

In the meantime, read this by Mark Weisbrot. A sample:


"If Mr. da Silva is barred from the presidential election, the result could have very little legitimacy, as in the Honduran election in November that was widely seen as stolen. A poll last year found that 42.7 percent of Brazilians believed that Mr. da Silva was being persecuted by the news media and the judiciary. A noncredible election could be politically destabilizing.
Perhaps most important, Brazil will have reconstituted itself as a much more limited form of electoral democracy, in which a politicized judiciary can exclude a popular political leader from running for office. That would be a calamity for Brazilians, the region and the world."

The photo was one I took four years ago in Brasília from the gorgeous Ministry of Foreign Affairs building, designed by Oscar Niemeyer.  Note the big Brazilian flag in the background.  Things appeared better then, with Dilma Rouseff poised to win re-election.  How times have changed.  Wonder if the view has.
Posted by Mary Soderstrom No comments: