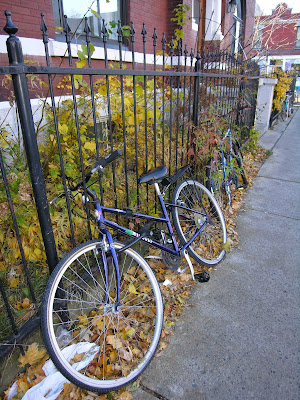 This is the time of year that the leaves fall--yesterday it was a veritable blizzard of yellow leaves on our street--but also time when bikes begin to look a little sad since so many will end up in the basement/garage/back balcony soon.

However, it frequently is the time for politics, and this year I seem to be up to my neck in campaigns.  First came the provincial election where I worked some (not as much as I should have probably) for the excellent Quebec Solidaire candidate Eve Torres, who came a quite respectable second in a riding that was gift to the Liberal Party.

Now there is a bye-election in prospect in Outremont to fill the seat vacated when Thomas Mulcair resigned at the end of the summer. Last Sunday I did some calling for the NDP candidate Julia Sanchez, another fine woman entering politics for the first time.

And today and tomorrow, I'm going to be calling into three Congressional districts which Lee and spotted last summer, thanks to SwingLeft, a movement to take back the US House of Representatives and whose motto is "Don't Despair.  Mobilize."  They looked winnable, so we checked to make sure that we could give money as non-resident Americans (yeah, this  kind of thing is mainly why I keep my dual citizenship), and coughed up some cash.  Now it's time to put my mouth where my money is, to turn the adage on its head.  Got a headphone-mike thing for my computer so I can use the campaigns' phone bansk, and when it's 1 p.m. here and 10 a.m. on the Pacific Coast where the three campaigns are, I'll spend some time on the phone.

Konrad Yakabuski in the Globe and Mail this morning is pretty downbeat on what will happen Nov. 6, even if the Dems take back the House.  The headline is "Democrats no match for 'nationalist' Trump." But you've got to try anyway, it seems to me.

BTW, my daughter and her partner don't quit bike riding in the winter.  I think they're more than a little nuts, but she's just bought some new winter biking duds so she can ride in style and comfort in winter weather.  Given the traffic conditions around here I can understand the appeal: what takes a half hour on a bike would take an hour on the bus.  But fixing that is another story.
Posted by Mary Soderstrom No comments:

Saturday Photo: Burning Bush, or Antidote to a Burning World? 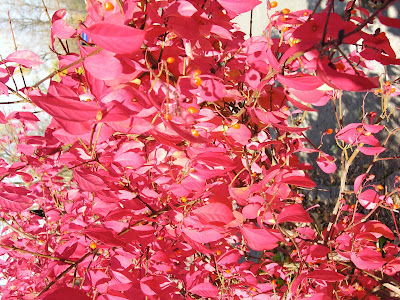 Our neighbors' burning bush trees are in full colour this week.  They are modest looking bushes for most of the year, but they turn a glorious red, come fall.

There have been moments these past few weeks when it has seemed to me that the world is on the brink of bursting into flames.  Not the nuclear war that haunted my dreams 40 or 50 years ago, but one where climate change, cupidity and stupidity seem to have brought out the worst in most leaders and many ordinary folk.

There is a connection between this lovely plant and the difficult state of the world: vegetation.  Plant, plant, plant: that would seem to be an answer to many problems from desertification to sweltering cities to rising CO2 levels.  Not the complete answer, to be sure, but a partial one.  And in this imperfect world, that's something.

Of course, it appears there's a caveat to be noted where burning bush trees are concerned.  In milder climates that ours, they can can become invasive, and in Massachusetts and New Hampshire they're actually banned.  Probably the lesson here is: we have to think about what we're doing and where we're going, even when we're pointed in the right direction.
Posted by Mary Soderstrom No comments: 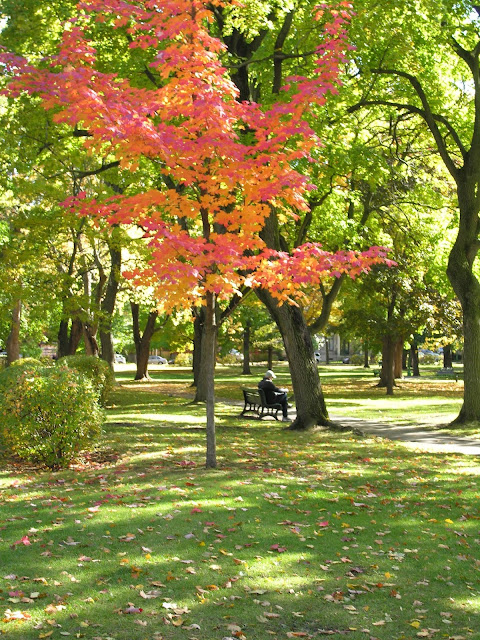 Fall is always a beautiful season here, with so many deciduous trees turning colour.  I'd always known that, but four years ago I learned just how gorgeous the trees are.  Until then, even with glasses, what I saw was basically a swirl of colour,  not individual leaves.  But, after much hesitation that ended when my optometrist asked if I was "still driving," I went in for a cataract examination.

As it turning out, my corrected vision wasn't that bad because of the way the cataracts were placed, but I was amazed at how much better I saw after the surgery.  Each and every leaf!  Landscapes as detailed as those painted by Canoletto! A very dirty kitchen floor!

Okay, I admit I wasn't too pleased at the last, and had to work several days to get the kitchen up to the standard I thought--pre-surgery--I was keeping.  Spots on linoleum, fingermarks and scratches in paint are much more evident to me now.

But it's definitely worth that to be able to see the pointillist landscapes I see now, particularly as every leaf stands out.  Wonderful--Canaletto and Klimt and Seurat naturally! 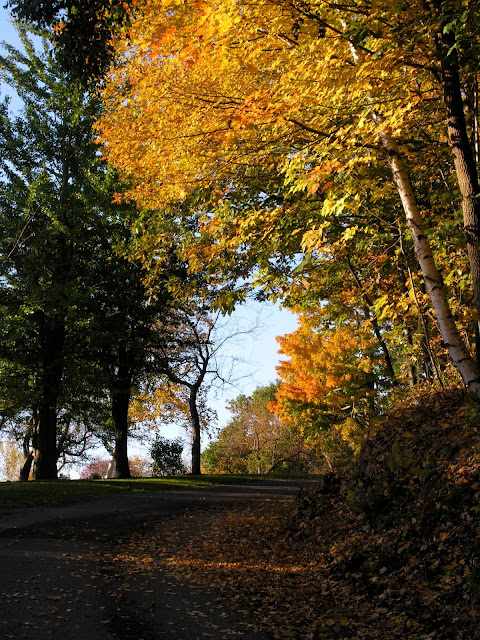 This is a photo I've used before, but I really like it since it shows the beautiful hesitation that Nature goes through here before closing down for the winter.

It is Thanksgiving weekend in Canada, and tomorrow we'll have about 30 adults and 10 children (give or take a few) for a community supper.  We provide turkeys, mashed potatoes and a few other basic things, and everyone else is invited to bring something they'd like to share with friends and family.

This year the youngest will be a bit older than 2 years, and the oldest are going to turn 90 this fall and winter.  Not all are related to us, the majority belong to the extended family of friends that we've developed over the years here.  We expect to have a good time, and eat and drink very well!

I am far from being a person of faith--any faith, particularly in these dark days when some folks to who claim to be religious are doing such terrible things--but I think it is a good thing to stop at least once a year and realize how much we have.  Not to give thanks, exactly, but to realize that those of us who are so lucky have a duty to be generous, and to try to make the world a better place for everyone.

Hope your weekend is wonderful.  Now, I've got to start cooking....
Posted by Mary Soderstrom No comments: