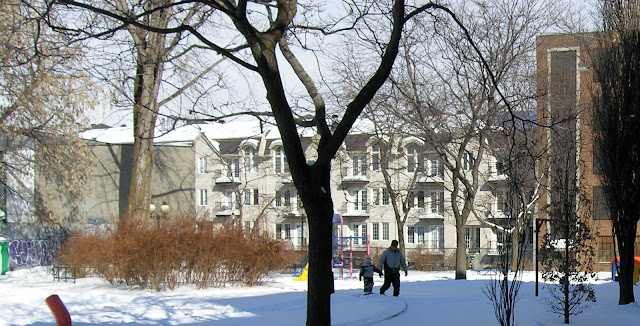 Didn't have a camera with me this week, but this one taken a few years ago captures the spirit of Montreal in the winter.  I picked up both the grandkids (Jeanne on Tuesday, Thomas on Thursday) early and took them to play in the parks near their houses for a while.  The days are getting longer which meant that Jeanne could skate without problem until after 5 p.m. (and Thomas could "skate with my boots" at Parc Macdonald until even later.

Cold, snowy weather is what makes this place interesting this time of year.  January was the warmest ever, of course.  I know there are much graver consequence of climate change, but, selfishly, I hope that we don't lose all this.

By the way the parks where this family is frolicking as well as Jeanne's and Thomas's are set down in densely populated neighborhoods.  Great city planning!
Posted by Mary Soderstrom