Saturday Photo: Oranges Inside, and Out 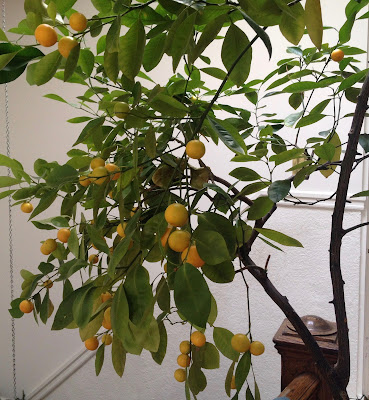 At some point I acquired an ornamental orange tree.  It was probably 20  or more years ago, and each year I put it outside for the summer and brought it in October, where it might--or might not--bear one tiny orange.

This year I must have done something right, because it had a lot of blossoms when I brought it in, which have transformed into perhaps three dozen oranges.  Quite wonderful, I think.  Later on when they start to fall, I'll get the grandkids to plant some of their seeds so they can have their own little tree.

This comes just after I read a very interesting social history of California, Trees in Paradise by Jared Farmer.  The book  tells the stories of four sorts of trees in the Golden State, the Sequoia, Eucalyptus, orange and palm. Farmer uses these as points of departure for a detailed, pretty rigorous account of California since 1850, and for reflections on how people have remade the landscape, for good (a bit) or for ill (mostly.)

I found the method particularly interesting because I'm currently struggling to organize the vast amount of material I've been collecting about concrete for my next book Rock of Ages: How Concrete Built the World as We Know It.    Right now I'm wondering: Why not use the four elements the Ancients recognized--earth, fire, water and air--to tell this story?

To be continued...
Posted by Mary Soderstrom

My plants, including my ficus tree and my large, old Jade plant, bought with my (now deceased) mother, are so necessary for fighting winter depression. My cat likes them too, and fortunately neither Livia nor my late Renzo have damaged them, knock wood.

ciao and happy year of the Dog! I believe oranges are also associated with the lunar New Year...